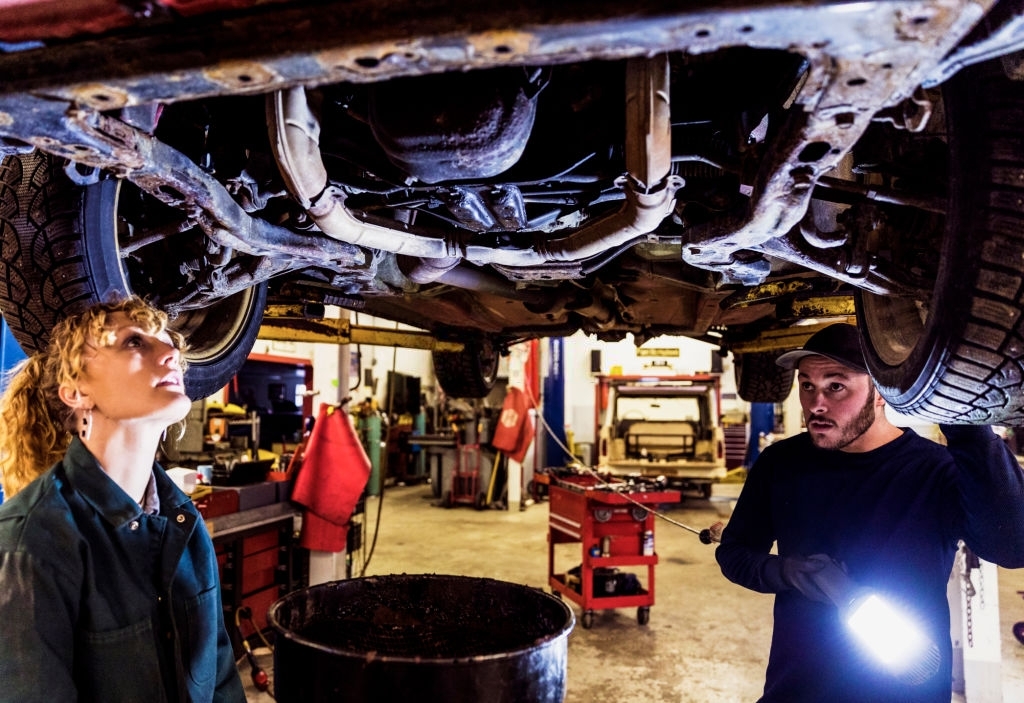 Rust on a car is one of the details that will instantly reduce its value. Even very small spots are unsightly flaws that usually stick out to the owner like a sore thumb.

Rust can also be a “silent killer” for your vehicle if it makes its way onto the frame and other important parts. To know if it’s worth it to fix rust on a car, you first need to know how much it costs.

Therefore, fixing rust is labor-intensive, so you may save some money by fixing small areas yourself for under $50

Repairing Rust on a Car

Rust repairs can end up being much more than you realize once you start investigating the extent of the damage. What looks like one small spot may actually be a whole panel, or there may be rust in areas that you can’t see, like the undercarriage of your vehicle.

The cost to fix rust on a car is mainly dependent on how extensive the damage is and where it’s located on your vehicle. The make and model of your car may also have some effect, because it may impact how difficult it is to access certain areas of the vehicle.

Cost to Fix Rust on a Car

A minor rust repair involves a very small spot of rust on your car, usually caused by chipped paint exposing the metal to the elements. These spots are usually less than three inches in diameter and not very deep.

This type of rust damage is more cosmetic than structural. Minor rust damage usually costs between $50 and $150 to have professionally repaired.

The cost would be per area, so if you had two or three spots that were under three inches, it would be between $50-$150 for each one. Often, you can repair these minor rust spots on your own if you’re so inclined.

Medium or intermediate rust repairs usually cost between $150 and $350. The final price would ultimately depend on the size of the rusted area and how many different spots needed work.

Like minor rust damage, multiple areas would be multiple charges. Major repairs could cost as little as $200, or as much as $2,500+, depending on the extent of the damage and how much labor will be required.

These repairs are for areas of rust damage that are large (typically more than 12 inches in diameter), and maybe deep and go all the way through the metal. Any rust damage that involves holes in the metal or hollow spots would be considered a major repair.

Unlike minor repairs that usually just involve sanding and removing rust, major repairs typically require extensive repair work. This often involves welding and even replacing panels or other parts on the vehicle.

Welding panels into place may add an additional $50-$250 to your total. For any size repair, if it requires a whole panel or large area of the vehicle to be repainted (as opposed to touch-up painting), it will increase the price overall for the work.

This is usually the case when repairing rust on a hood or door. For example, to repair a rust spot on a hood, you may end up having to sand down the entire hood and repaint it to ensure a good match. For a job like this, it’s best to budget between $300-$500 to be safe.

Fixing Rust on a Car Yourself

If you just have a small area of rust damage, you may be able to repair it yourself. One option is to use a repair kit that you can purchase at any auto parts store, or you can order it online from a retailer like Amazon.

For example, a Bondo kit typically costs under $35 and includes everything you need to sand and patch a small rust hole. For simple surface rust that’s smaller than the size of a quarter, you can try rust dissolver gel, which you can find for $10-$20.

For other small jobs, you can also purchase the supplies separately (many of which you may already have at home), and remove the rust, then sand and paint over the area. If you have a small area of rust and want to go the DIY route, you will need:

What is Rust and How to Prevent it

According to Carfax, rust occurs when iron or iron alloys (like steel) are exposed to air and water. A chemical reaction occurs which produces iron oxide – rust.

Iron oxide (rust) is brittle and breaks apart easily, which means that rust on your car can jeopardize the vehicle’s integrity in the event of a collision.

Surface rust is fairly common and may occur if a stray piece of debris chips some of your paint off, or if you live somewhere where salt is used on roadways during the winter.

Surface rust is typically fairly simple to repair, and sometimes you can even do the repair yourself. Surface rust becomes a problem if it continues to corrode deeper into the metal.

Instead of a cosmetic issue, the rust can make its way into the body panels or frame. The undercarriage of your vehicle is also an area where surface rust can develop.

Structural rust is a serious problem and it can severely impact your vehicle’s structural integrity. The undercarriage of your vehicle is susceptible to having surface rust become structural rust, especially when it’s exposed to water, chemicals, and salt.

For this reason, if you’re looking to purchase a used vehicle, you should always have it inspected carefully at a garage where it can go up on a lift.

There are all sorts of elements in the environment that contribute to rust. Insects, bird droppings, road salt, and dirt will trap moisture on your vehicle and break down the clear coat and paint.

Once the paint is gone, the bare metal is exposed to the elements. If you live in an area where your car gets exposed to salt (either on the roadways or if you live near the beach), you’ll want to wash your vehicle more frequently.

Also, make sure to wash underneath your car as well. Check your vehicle regularly for dents, scratches, and dings, as this is where rust will usually begin forming.

If you notice an area where the paint has chipped off your vehicle, you should address it before the rust has a chance to develop. A simple application of touch-up paint should do the trick.

Touch-up paint is relatively inexpensive, and usually will run you between $25 and $65, depending on what you need. Another option is to apply a rust-proof coating to your vehicle to protect the undercarriage.

Most body shops and garages offer this service using either a black, rubberized coating or a paraffin-based sealant. Permanent rust proofing will last for about 10 years and usually costs around $500.

Another option is to have rust-proofing spray applied to the underside of your vehicle on an annual basis. This is a much less expensive option but doesn’t last as long as the permanent solution.

In general, annual rust-proofing costs around $100.

Other Things to Consider

If the rust damage on your vehicle is extensive, it may not make sense to pay for very costly bodywork, especially if the value of the car is not in-line with the cost of repairs.

However, if the vehicle that’s retained its value or if it has some other sentimental value to you, then you may be able to justify the cost of rust repairs.

Maaco recommends that you consider any diminishing returns and decide how long you want to keep your vehicle on the road, and consider how much work and cost it will take to get your car to that point.

It’s also important to get a thorough understanding of what sort of guarantees or warranty the body shop will provide with rust repair. Many garages do not guarantee rust removal because it’s so difficult to know for certain how extensive the damage may be under the surface.

The last thing you want to do is pay a lot of money to remove rust from your car only to have it come back in a year.

Rust is a common issue with many trucks, with some makes and models being more prone to it than others. For example, certain Chevrolet trucks are known for having issues with rust.

Because the truck bed is almost always exposed to the elements and may have items in it trapping moisture, rust may easily develop in that area.

The problem with rust in the bed of a truck is that it may spread to the frame and other areas of the body will cause more damage and be harder to repair. So, it’s a good idea to address a rusty truck bed as soon as possible.

The good news is that it may be possible to remove the rust from a truck bed yourself, as long as it’s not so bad that there are large holes or hollowed-out areas.

Follow these steps to treat your truck bed for rust damage:

The best way to combat rust corrosion on your vehicle is to prevent it from occurring. Regular maintenance and washing/waxing of your vehicle will help to minimize the potential for rust.

Be sure to address small dings and scratches so that rust doesn’t begin developing under the surface. If your vehicle has rust damage, the cost will depend heavily on how extensive the problem is and where it’s located on your vehicle.

Most of the cost has to do with labor, so the bigger the job and the longer it takes, the more costly it will be. You will definitely want to consider the potential cost versus the return on your investment.

If the vehicle isn’t worth what it would cost to fix the rust problem, it may be a better option to consider getting a new vehicle instead.