How Much Does Maaco Rust Repair Cost? 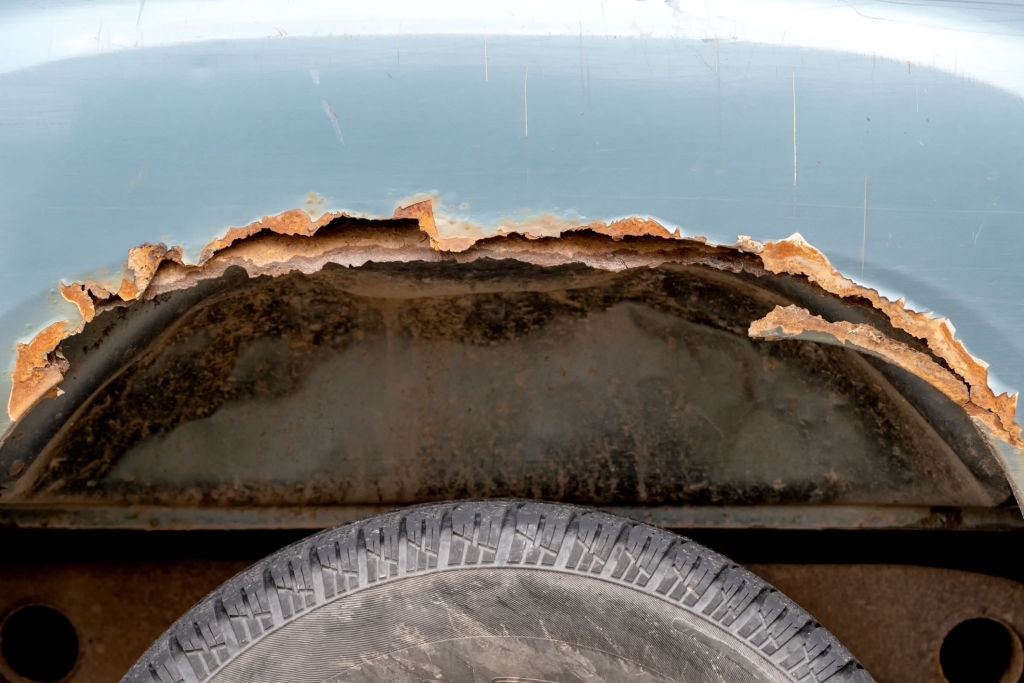 Rust is one of those silent killers that can render your car inoperable over time. Most cars start to develop rust at some point in their lives, so it’s important to be on the lookout for rust on various metal fixtures.

If you do spot rust on the undercarriage or your door panels, Maaco is a good choice to go get rust removal and repairs.

Overall, you can expect to pay approximately $1,000 on average for Maaco rust repairs. Rust repairs can cost from $100 on the low end to over $3,000 on the high end, depending on the extent of the damage and the pre-restoration work done. Alternatively, you can buy a DIY rust removal kit for about $ and repair the damage on your own.

There are a lot of things that go into rust repairs from Maaco. So we put together this comprehensive article on the costs of rust repairs. We will consider the different levels of rust damage and talk about the costs of DIY rust removal options.

Maaco is an American-based autobody and repair shop that was founded in 1972. Maaco has locations in all 50 states of the US and has to date serviced over 20 million cars.

How Much Does Maaco Charge for Rust Repair?

The cost of rust repair from Maaco can range from around $100 for small minor surfaces all the way to $3,000 for an entire undercarriage restoration. Most people will end up paying around $800 to $1,000 for moderate rust repairs from Maaco.

This cost heavily depends on the extent of the rust damage, the kind of metal, and the age of your car. You can reach out to a nearby Maaco location to get quotes and prices on rust removal services.

There are three types of rust that every car owner should be familiar with.

Surface rust is the least serious type of rust and occurs when the top later of your car’s metal picks up a layer of corrosion. Surface rust will remove paint layers, but it will not seriously damage the integrity of your car’s design.

You can usually remove surface rust on your own with some sandpaper and rust remover. You will then have to repaint and reseal the affected area.

Scale rust occurs when the corrosion eats away the top laters of metal, leading to holes and dents in the surface.

Scale rust can weaken the metal and cause holes that penetrate all the way through. You can also remove this kind of rust on your own with the right tools. You will need a wire brush, rust remover, and material to seal the damaged areas.

Penetrating rust is the most serious and can damage the undercarriage and frame of your car. If your car has penetrating rust, then you should try to get it fixed as quickly as possible.

If you do not want to pay Maaco to repair rust, you can get a rust removal kit online and repair the damage yourself. Below is a table showing the average cost for various rust removal kits. These prices are averages and are subject to change.

Most of these kits come with a rust converter that you can apply and let sit. After a while, it will dissolve the rust so you can scrape it away with fine-grained sandpaper or metal wire brush.

Most rust removal kits available online will work fine for surface rust and milder cases of scale rust. However,  repairing more extensive penetrating rust will require an expert. Fixing penetrative rust involves welding and other techniques most people can’t do at home.

Most cars are made from high-tensile strength steel and form most of the body panels, chassis, and undercarriage. Other common metals incorporated in the design include aluminum, magnesium, iron, and titanium.

All other things being equal, steel, aluminum, and iron will be the least expensive types of metal to restore and repair from rust damage. Magnesium and titanium are relatively more difficult to clean due to their molecular structure.

Some rust damage is minimal and not that serious, such as rust spots on the hood or door panels. This kind of rust is inexpensive to repair and can be fixed in a few hours.

More extensive rust, such as on the undercarriage or axels will be more expensive to repair.

The make and model of your car also matter. Specialty brands and luxury vehicles will cost more to repair.

How much do Maaco rust repairs cost?

Rust repairs at Maaco can range from just a few hundred dollars to over $3,000 for extensive rust repairs.

Most people will end up paying an average of $1,000 for moderate rust repairs. The cost of repairs depends on your car’s make and model as well as the extent of the damage.

Is Maaco a reliable auto shop?

Yes, Maaco is a legitimate autobody shop that has a good reputation among the public.

They have locations in all 50 states and offer a wide range of services, in addition to rust repairs, such as headlight restoration, truck lining spray, and paint restoration. They also charge affordable prices compared to several other autobody shops.

Can I drive with rust damage?

It depends on the level of rust and damage. If the only rust is a few patches on your doors or your car hood, then you should be able to drive with little to no issue.

However, if you have rust on your axels or undercarriage, then we do not recommend you drive on it at all. Rust can eat through the undercarriage and cause severe damage to your car.

Is all rust damage serious?

Some rust damage is not very serious and won’t impede your car’s functionality. However, severe rust damage can eat through the main structural components of your car and cause serious damage.

If the rust is solely on the top layer of the affected area, then it is probably not that serious. However, if the rust is pitted and causes holes in the metal, you should immediately get it fixed.

How long does it take to repair rust damage?

It depends on the extent of the damage, but it can take anywhere between 2 hours to a few days to repair rust damage. Small rust spots on door panels can be fixed quickly but larger undercarriage restoration projects can take a few days or even a week.

Can I repair rust damage on my own?

Yes, if you have only a few rust spots, you can buy a rust removal kit online and fix the affected spots yourself.

However, if the damage has eaten through the top layer of your car’s metal or you have significant rust on the undercarriage or axels, we highly recommend taking your car to a professional.

Is fixing rust damage worth it?

Maaco is known for its affordable prices and quick service, but an extensive rust repair can still cost over a few thousand dollars. When it comes to rust repairs, the key is to figure out at which point the cost of repairs provides diminishing returns.

If you have had your car for a long time and the rust damage is extensive, then it is most likely in your best interest to buy a new car entirely.

However, repairing rust can improve your car’s appearance and extend its lifespan. Surface rust and scale rust can be annoying, but they do not have to create permanent damage. You can repair that kind of rust on your own or your can take your car to a professional.