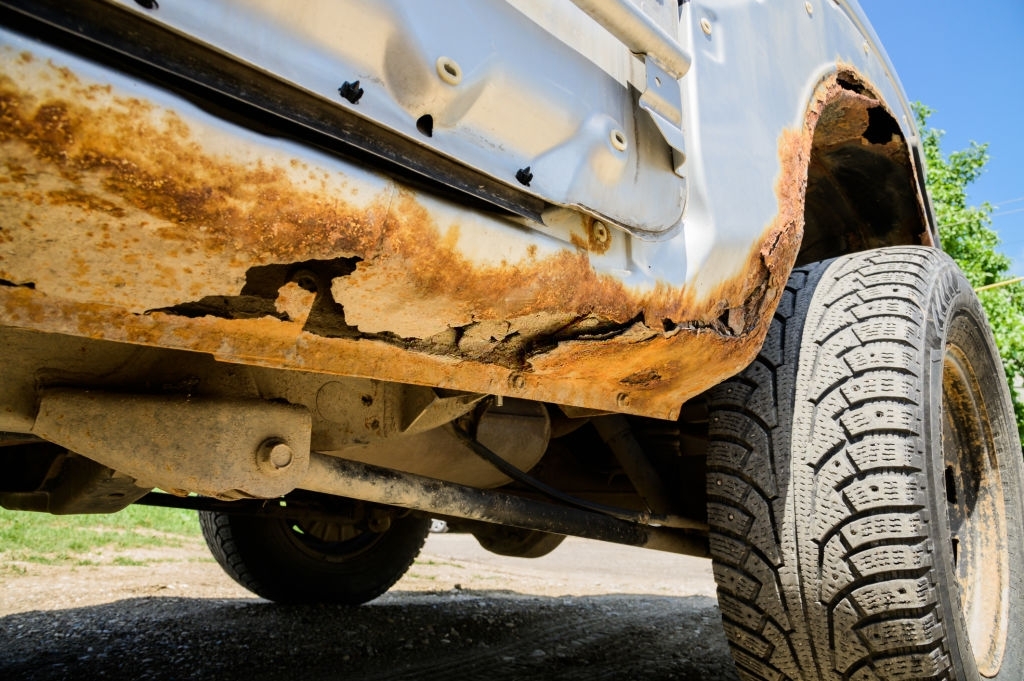 Most modern cars and trucks are made with high-durability metals like steel, aluminum, and titanium. The benefit of these types of metals is that they are highly resistant to environmental weathering.

However, even the toughest metal can rust under the right conditions. Rust might seem like just a nuisance, but a rusted frame can cause serious truck issues. If your undercarriage or truck body is rusted, you should look into getting it fixed.

On average, it will cost $1,500 to repair truck frame rust. The typical price range is between $100 for small spot repairs, all the way up to over $5,000 for extensive rust removal and part repairs.

If your frame has sustained enough damage, then you may have to replace it. Replacing a truck frame costs an average of $8,000 or up to $15,000 depending on the make or model.

There are a lot of factors to consider when it comes to truck rust repairs. So we put together this comprehensive guide on truck frame rust repair costs. We will talk about the costs to remove rust or replace a rusted frame.

We will also talk about DIY options for rust removal as well as whether repairing rust is worth it.

What Is a Truck Frame?

Most modern cars have a unibody design, meaning that they consist of one single metal body without a frame. Trucks are built differently and have a separate body on top of a frame.

The two-body design of trucks makes them tougher and better for hauling heavy loads. That means that the frame and body can sustain separate damage.

One of the most common issues that truck frames have is rust. Since the frame is closest to the ground, it picks up a lot of dirt and moisture.

Modern trucks use highly resistant materials such as stainless steel and titanium. But consistent inclement weather can eat away at the chemically protective layers covering these metals.

Truck frames consist of several parts, including but not limited to:

Truck frames consist of several parts, including but not limited to

Truck frame rust is a particularly serious issue, as it can eat through important parts of the frame that connect to the wheels, axles, and body. If your truck frame is rusted, it creates a very unsafe condition to drive in. The frame could snap while driving.

How Much Does it Cost to Remove Truck Frame Rust?

Repairing truck frame rust can be very expensive due to the amount of intensive labor required. Rust forms when oxygen reacts with the metal on the body so removing it requires a great deal of scraping and filing.

In some cases, you may need to replace the entire frame if it is too damaged.

On average, you can expect to pay about $1,500 on average to repair frame rust. The cost can range from under $100 for small spot removals to over $5,000 for significant rust repairs.

For severe damage, you may pay more than $10,000 to repair truck frame rust.

Small rust spots measuring a few inches across are relatively easy to repair and you can most likely do it yourself at home.

Larger rust spots can be fixed at home, but at a certain point, you are looking at a job best handled by a professional. Repair costs can get very expensive when the rust eats through crucial components of the truck’s undercarriage.

If you do not want to take your car to a mechanic, then you can repair small to medium rust problems on your own. You can buy a rust removal kit online from a nearby autobody store.

Rust removal kits are fairly cheap and can be applied at home. Keep in mind that if the rust has eaten through key components of the frame and is not just superficial, then you will have to replace entire sections of the frame.

Most rust removal kits come with some solution that will remove the rust and some body patch material to fix holes or damage. However, you can buy solution remover or body patch kits on their own.

The typical truck rust repair kits will cost you about $30 on average and the typical price range is between $10 to $50. Professional kits can cost $100 to $200 and include applicators and solutions.

Below is a table showing the average cost for various popular truck rust removal kits.

As you can see, most rust removal kits are cheap and can be performed at home. You may need a few tools though, such as a wire brush, sandpaper, gloves, and a mask.

You should also have materials to repaint the affected section afterward. Paint materials for a truck will cost you about $100 on average, including paint, guns, primer, and other preparatory materials.

If your frame is rusted all the way through, then it may be impossible to repair properly. In that case, you may need to look into replacing the frame entirely.

When you replace the frame, your mechanic will update the vehicle’s chassis and main connectors and attach the frame to the body.

Overall, you can expect to pay approximately $8,000 on average to replace the entire frame of a truck. Depending on the make/model of your car, you could pay upwards of $15,000 to replace your truck frame.

Replacing the truck frame is very expensive because your mechanic will have to essentially rebuild an entire assembly and modify it to fit the dimensions of your car.

At that point, many car owners may ask whether replacing the truck frame is worth it. In most cases, the best option when the frame is damaged beyond repair is to get a new car.

The cost to replace the frame and ensuing maintenance costs afterward just do not justify the use you will get out of the car afterward.

Unless you have a classic model you are trying to restore or you have sentimental value with your truck, then you should consider getting a new car instead of replacing the truck frame.

Age of the car

The most obvious thing affecting costs will be the age of your car. The older your car, the more likely it will have more damage to the frame that needs to be repaired. Older metals may also be harder to treat for rust.

Repair costs also depend on the extent of the rust damage. Simple surface rust damage will be relatively easy to repair while scale rust will require more materials and labor.

Penetrating rust will cost the most to repair and may require you to replace sections of the frame.

The type of metal used in the frame matters as well. Most truck frames use stainless steel but others might use aluminum or titanium alloys.

Aluminum and titanium alloys will cost more to repair than steel because the metal is of higher quality and has protective features. You may also need to re-galvanize your frame to protect it from future rusting.

How to Remove Truck Rust from Frame

The exact way to remove rust depends on the type of rust that it is. There are three levels of rust damage for cars:

Surface rust just sits on the top layers so you can often scrape or wipe it away without too much trouble.

Start with an abrasive tool such as a sanding wheel or some sandpaper. Scrape away the metal until the shiny metal of the surface is visible. From there, you may want to apply a rust preventer to the affected area.

Even if you can’t see it, there may be some rust present. Let the rust remover sit for at least an hour then apply a second layer if needed.

Scale rust is a bit more serious and occurs when rust eats through the top layers of paint and gets into the underlying metal layers.

Scale rust will cause your paint to bubble slightly as iron oxide molecules form. The resulting pits and scarring are called scale rust.

To effectively treat scale rust, you will have to remove it and patch the affected area with a sealer. The sealer will fill in missing sections of the material that the rust ate away.

You will need to remove the scale rust with a grinding plate or wire brush first and sand the surface down with an abrasive pad. You need to remove all visible rust before placing the sealer or else it will not adhere properly.

Make sure to follow the body filler instructions carefully, and make sure to add a layer of rest preventer on top afterward.

For penetrating rust, your best bet is to get a professional. Penetrating rust eats all the way through the metal, leaving small holes and cracks on the surface.

Penetrating rust can severely affect the structural integrity of your car, so we highly recommend having a professional handle penetrating rust. You will likely have to replace the affected parts of your frame.

How much does it cost to repair truck frame rust?

Can I drive on a rusted frame?

You can drive on minimal rust damage with relatively little worry. Rust can cause serious driving problems when it rusts through key connecting components of the frame and chassis. Driving on a heavily rusted frame can pose a risk for your

What material resists rusting the best?

Modern trucks use several metals that are highly resistant to corrosion, such as stainless steel, titanium, and aluminum alloys.

Most modern trucks are also galvanized with a layer of zinc which prevents and mitigates environmental weathering and rusting.

Can I repair rust damage on my own?

You can easily repair minor to medium weathering on your own with relative ease. You can buy a rust removal kit from a local hardware store or online for relatively cheap.

Major rust damage or damage to the main components means that you may have to replace entire components.

How can I stop rust damage?

The best way to prevent rust is to regularly clean your truck frame and body. Regular cleaning will get rid of the dirt and grime that contribute to rust formation.

When you wash your car, make sure to thoroughly dry wet areas with a cloth afterward.

Is replacing my truck frame worth it?

Generally speaking, no. The Truck frame is a crucial part of the truck and replacing it is expensive enough that you would probably be better served getting a new car entirely.

The main reasons to replace the frame are if you are restoring a classic model or if the rest of the truck is in good condition.

The frame is a very important part of your truck and one of the things that separate modern trucks from cars. Rust damage on the frame is important to fix quickly as it can progress and cause severe damage to your truck’s components.

Rust removal can be performed on your own or you can get a professional to do the job for you. If the damage is sustained enough, you need to consider rebuilding the frame or buying a new car. As always, make sure that you get quotes from several mechanics so you can get the best price possible.