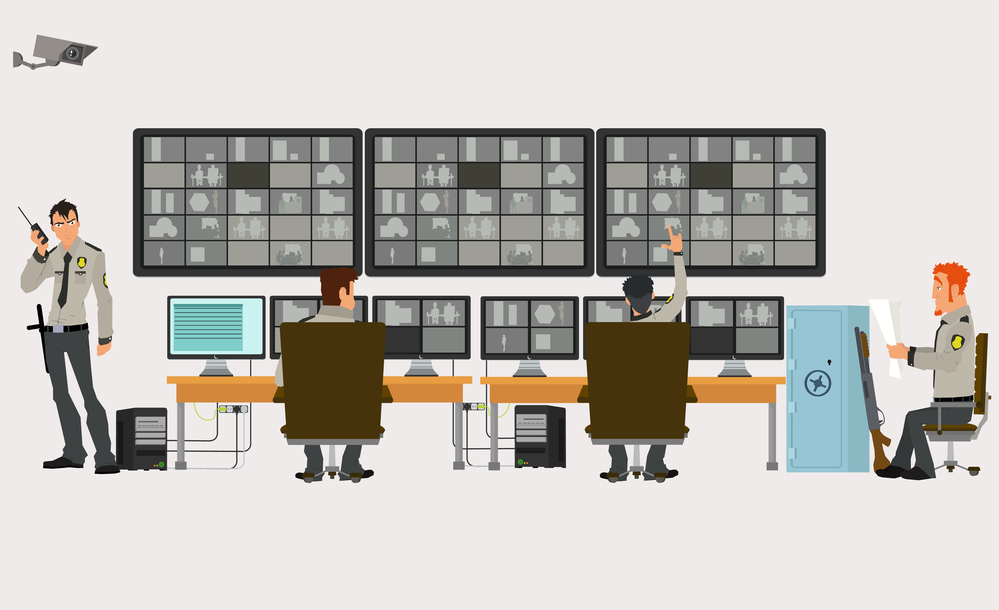 Did you know that fraud and theft cause a business to lose up to 7% of its revenue each year? For some businesses, that could mean thousands or hundreds of thousands of dollars. With a surveillance system, you can reduce theft and keep your business and assets protected.

The average cost to install a surveillance system ranges from $2,320 to $3,910. You need a few main components – the cameras, monitors, NVR hard drive, cables, and ongoing monitoring. It’s also a good idea to hire a professional to install your security system.

Want to learn more about the cost to install a surveillance system? Keep reading and check out the most frequently asked questions at the end of the page.

The Average Cost to Install a Surveillance System

To install a surveillance system in your business, you should expect to pay between $2,320 to $3,910. The minimum price of $2,320 assumes no professional installation (i.e., DIY installation) and WI-FI cameras (no analog cables). We determined the price based on 12 cameras – either dome, bullet, or box cameras. Each of these cameras has a marginal price difference.

Should you choose to install thermal cameras, you should budget an additional $700 per camera or $8,400 for 12 cameras. Keep in mind, that the exact number of cameras will depend on how big your business is and the nature of your business.

The below table outlines each component of a business surveillance system and its corresponding cost. Note: it does not include ongoing monthly costs such as monitoring or insurance. You can learn more about those costs below.

Now that you have a summary of the main costs of a surveillance system, let’s take a deeper look at each item you will need to set up the system, beginning with the different types of cameras.

Cameras: The Different Types and Their Costs

When you install a surveillance system at your business, you can choose between various cameras. Each camera ranges in price and quality.

Notorious for their black dome, these cameras are some of the most popular. The dome is 100% transparent on the inside but fully tinted on the outside. From down below, you can’t tell where the camera is pointing.

Not only are dome cameras discrete, but they’re also resistant to the outdoor elements and come with night vision technology. You can use these cameras both inside and outside. Lastly, dome cameras are extremely hard to break or tamper with, making them much more effective against vandals.

As the name suggests, box cameras come boast either a square or rectangular design. They are not as discrete as dome cameras but are a bit more affordable. The main benefit of box cameras is that you can easily swap out the lens, depending on your security needs.

While it varies on the brand, many box cameras have advanced features such as auto white balance and noise reduction. You can install box cameras both over Wi-Fi or with cable connections.

Many business owners have to choose between dome, box, and bullet categories, as they all fall within a similar price range. Bullet cameras are the middle ground between dome and box cameras. They’re small and often shaped like a small bullet. Instead of mounting them within a ceiling tile as you do with a dome camera, you typically have to mount bullet cameras against the top portion of a wall.

Thermal cameras are some of the most advance and expensive on our list. They’re best suited for businesses with very valuable assets that they need to continuously monitor. Thermal cameras detect what’s not visible to the human eye – heat. Even if the intruder is not directly facing the camera, thermal detection can detect him or her.

Another benefit of thermal cameras is that they don’t trigger false alarms as some security cameras do. For example, bullet or box cameras might make your alarm sound off because a leaf blew across the lens. A thermal camera, on the other hand, would not trigger a false alarm. Many business owners integrate thermal cameras with IP cams for maximum security.

Why might you choose to secure your business with wireless IP cameras? You can control these cameras over virtually any wireless device – laptops, smartphones, and tablets. Many of these cameras have built-in features, such as the ability to send you notifications when the motion detector is triggered.

A pan tilt zoom (PTZ) camera is very similar to a dome camera. At first glance, it’s easy to confuse the two of them. PTZ cameras have a discrete dome that’s transparent on the inside. The major difference is that they have enhanced features, such as better zoom and remote control.

Even though many security cameras are compatible with phones and tablets, you probably want a security monitor for your business. The most common type of monitor is a CCTV monitor, which can support the following connections: HDMI, VGA, USB, and AV.

CCTV monitors can typically display the video of up to four cameras at a time. These monitors retail for about $140 (for 15”). You should buy at least one monitor for every four cameras. So, if you have five cameras, you would need two monitors.

The network video recovery (NRV) hard drive plays an important function – storing the video footage captured by your security cameras. The more cameras you have, the larger amount of storage you need. Fortunately, these hard drives are relatively cheap for the amount of space that you get. For example, you can buy a 2 TB NRV hard drive on Amazon for around $220.

Most security surveillance bundles already include an NRV hard drive, so you will not need to purchase it separately. However, if you buy a bundle, you should take note of how much storage the NRV has. You should also consider buying a backup NRV in case something happens to your primary one.

If you decide to install an analog surveillance system, you will need to buy cables. The price of cables varies greatly depending on the layout of your surveillance network. In our pricing estimate, we budgeted $20 in cable costs per security camera. For this price, you can buy a 100-ft. BNC cable.

While nearly all monitoring companies charge a monthly fee, some may also charge an activation fee as well. The activation fee costs around $100 on average. If you plan to hire a company to monitor your security cameras, then you should build this activation fee into your initial budget.

If you finance a surveillance system, you have two options: financing through the seller (if available) or financing through a bank. While most sellers do not charge upfront financing fees, banks charge a loan origination fee ranging from 1 to 6%.

On the other hand, installing a surveillance system can lower the cost of your insurance premiums. If a thief sees your security camera, he or she might be less likely to steal from you, making your business less of a risk to the insurance company. When calculating the total cost of installing a surveillance system, you should consider any amounts that you have saved on insurance premiums.

Would you like to install a wired or a wireless surveillance system? Well, this will affect the overall cost of installation to some extent.

Generally, installation equipment and parts for a wired system are cheaper, but wireless systems are way cheaper to install (installation labor costs are lower).

So, how does the pricing for these two surveillance system types differ?

Wires make for a much tougher install. This is mainly because holes need to be drilled, wires installed and conduit kept in place.

In most cases, professional help is recommended. The installation cost of a wired system runs higher than that of a wireless system, often between $150 and $200 per camera.

However, installation parts and components for a wired system are quite affordable. The good thing about wired surveillance systems is that they cannot be hacked remotely or jammed.

Again, most of the leading brands come with a battery backup, which comes in handy during power outages.

Wireless security systems are comparatively easy to install. This makes them the best surveillance system choice for a do-it-yourself (DIY) project.

With these types of surveillance cameras, you can save money by installing them on your own.

For a DIY project, you will spend $0 on labor costs, but a professional will charge you about $100 for each camera installed.

Although the cost of installing wireless surveillance cameras is low, the equipment and installation parts are relatively costlier to buy.

Leading wireless surveillance system brands also offer remote access capabilities. You will also find such a system easier to move from one building or room to another.

Want to learn more about the cost of installing a surveillance system before you buy one for your business? Take a look at the most frequently asked questions.

Is it Cheaper to Buy the Parts of a System Individually?

More often or not, you can buy a surveillance system in a bundle and save money. It’s not only convenient, but it will have all the items you need to set up the system.

How do I Determine the Number of Cameras I Need?

There’s no set rule to help you determine the number of cameras you need. It depends on how big your business is, and the nature of your business. A business could have anywhere from 12 to 64 cameras.

Can Own a Surveillance System Lower My Insurance Costs?

Can Install a Surveillance System on My Own and Avoid Installation Costs?

Both box and bullet cameras are the cheapest, depending on their features. On average, these cameras retail for about $100.

What’s the Total Cost to Install a Surveillance System?

Is Installing a Surveillance System Worth it?

Yes, installing a surveillance system is a must for any type of business. A surveillance system protects you in a variety of ways. First, it can deter thieves or help you catch thieves if you hand the footage over to the police. In addition, it can protect you from fraudulent insurance claims from both customers and employees.

Even though installing a surveillance system can cost up to $3,910, you are certain to recoup the initial installation cost in the long run.