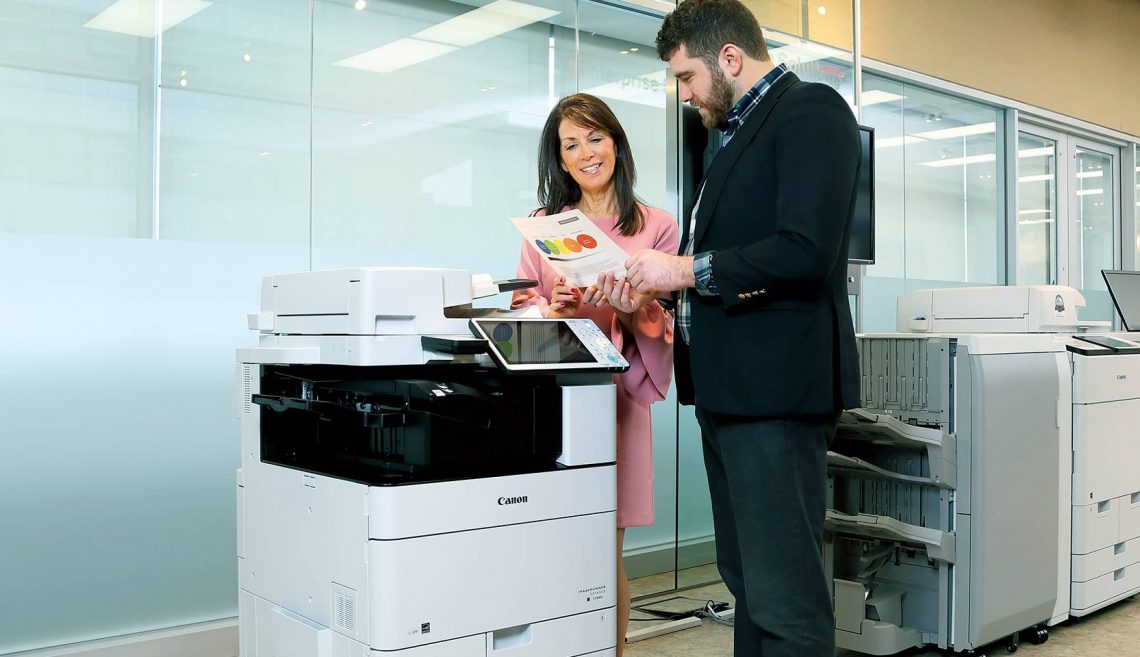 Businesses that choose to purchase Canon copiers are looking for machines that are reliable and can handle many other tasks, such as stapling printed bundles of pages.

The general costs of each copier depend on the different functions that each performs, as well as things like black and white versus color printing.

These laser printers are all designed for heavy-duty office use and stand alone on the floor of the office. They are not desktop models.

Get Free Quotes for Copiers

What is a Canon Copier?

Canon copiers are pieces of office machinery that make copies of printed pages. Some make black and white copies, while others can print in color.

Copiers serve a very important function. Even though today’s workplace is largely paper-free, there’s still a need for actual pages that must be passed around the office by your bookkeeper, as well as paper contracts that must be signed and submitted.

Canon is a well-known name in the copier industry. They have been in business for decades and have developed a following, simply because their copiers are well-made and reliable.

Many large companies choose Canon copiers over other brands, simply because their equipment is fairly priced and can handle a number of additional functions.

Determining The Best Canon Copier for Your Needs

Canon offers quite a few different copier lines. Their imageRUNNER category is their most extensive and includes a number of models within each series.

To make choosing the best copier easier for you, we’ve broken down the model lines into groups.

One of the simplest of Canon’s imageRUNNER copiers, the Advance 600 series is very easy to set up.

Ease of use, as well as printing from Google Drive or the cloud, make this basic model a good choice for people who just want a simple, no-fuss copier.

With the 700 series, you have several choices. You can either choose the simpler model that fits on top of a table or go with the extended one that includes a special base.

Black and white copying, multiple paper sizes, and smart connectivity are all hallmarks of this copier series.

The imageRUNNER 1600 series is fairly small and light. These copiers double as printers and must be placed on a table or other surface to work.

If your office needs a basic copier that handles black and white printing, as well as printing from a USB stick, then this series will work.

These copiers have a large touch screen and can handle cloud printing – meaning they connect to your office’s wireless network so anyone can print or make copies from anywhere in the building, depending on the software you choose.

This model series is large and stands alone. It weighs too much to be supported or placed on a table or other surface.

When it comes to printing a lot of different files that need to be placed into groups, the Advance DX Series will do the job.

Not only can you connect the DX copiers to your Google Drive, but you can also create folders within the device, drop files in them, and then set up special print specs for everything in those folders.

The copiers in this series stand alone and come with wheels on the bottom.

Security features are what differentiate the 4000 series from the others. If you print a lot of secure documents, then you’ll appreciate the built-in McAfee Antivirus software.

Like most of the imageRUNNER series, the Advance 4000 printers are standalone devices.

The imageRUNNER Advance 8000 Series takes up quite a bit of floor space. More than just a standalone copier, these machines handle everything from collating to stapling.

If you want a state-of-the-art system that can truly handle it all, the 8000 series is a good choice.

Buying Versus Leasing a Canon Copier

When it comes to buying a Canon copier, you have several choices. You can either buy a new copier, choose to purchase a used model, or you can lease one from a company that provides the option.

There are several pros and cons to each of these choices. It all comes down to the amount of maintenance that you believe the copier will need, as well as your company’s budget.

If you choose to lease a Canon copier, you’ll have to pay a monthly fee. Expect to pay between $100-$900 per month. However, this fee usually includes the cost of possessing the copier, as well as things like maintenance, should it break down.

Some leases only allow you to make a certain number of copies per year. With that said, some leasing companies will replace the toner for you, making the cost worthwhile.

New Canon copiers will cost more than used models. You might save some money when buying a used copier, but those savings can be eaten up by maintenance costs. In addition, new copiers tend to come with manufacturer warranties.

It makes sense that different models of Canon copiers come in at different price points. If you want one that prints many copies very quickly, then you’ll pay more for one that can do the job.

Basic models tend to cost less because they do fewer things and are less complicated to build.

Here, we’ve broken down the prices of Canon copies based on their series.

Keep in mind when choosing a copier that you’ll have additional costs as well, including toner and maintenance packages.

Get Free Quotes for Copiers

Canon is one of the best-known copier companies in the world. Their office machines are reliable and long-lasting.

When choosing a Canon copier for your office, you’ll need to note which features are the most important for your needs. Since many come with things like the ability to print double-sided or collate pages, you may need to pay extra for a machine that handles those things if you truly need them.

Overall, you can expect to pay somewhere in the range of $2,000-$40,000 for a reliable Canon copier. You may be interested in how much the scanning service costs.