Also known as the engine front cover, a vehicle’s timing cover serves the purpose of ensuring that the engine’s timing components work correctly.

If these timing components aren’t properly lubricated and don’t work correctly, parts such as the crankshaft and camshaft will not spin at the proper rate.

The timing leak cover can sometimes develop an oil leak, which needs immediate fixing so that you don’t further damage other components of your engine.

On average, it costs around $845 to fix a timing cover leak by replacing the timing cover gasket (the most common repair to fix this issue). The above cost includes the cost of parts ($85) and the average cost of labor is $760.

In this cost guide, we’ll break down the costs associated with fixing a timing cover oil leak, looking at the cost of parts, labor, and factors affecting the overall cost.

Below, we’ll compare the cost of replacing a timing cover gasket in various vehicle makes and models, looking at the cost of labor and parts as well.

Note that these estimates are not based on any particular location-specific auto labor rates, but rather, are representative of national averages.

When you have a timing cover oil leak in need of repair, the valve cover gaskets and oil pan gaskets may be removed during the repair process.

In some cases, repairs or replacements of both of these parts may be required. Let’s explore the costs of replacing valve cover gaskets and oil pan gaskets.

Below, we’ll cover the average cost of this part replacement for various vehicle makes and models, to give an overview of the range of costs. Note that these average estimates aren’t based on a specific location or labor rate.

When we look at the above cost estimates, you can see that the cost of labor generally costs far more than the cost of a new valve cover gasket itself.

Further, replacing this part costs more when it comes to luxury vehicles, such as the Mercedes-Benz E320.

You may also have issues with your oil pan gasket if you’re having a leak related to the timing cover. When this is the case, you may need to replace the oil pan gasket altogether.

Below, we’ll cover the average cost of this part replacement for various vehicle makes and models, to give an overview of the range of costs. Again, these average estimates aren’t based on a specific location’s auto labor rates.

When it comes to replacing the oil pan gasket, prices can get pretty high depending on the type of vehicle you own. Luxury vehicles, such as Mercedes-Benz models, have much higher rates for labor and parts than, say, a Honda model.

On average, the labor for this job tends to be much higher than the cost of parts, which means you could save a lot of money by installing the new part yourself. 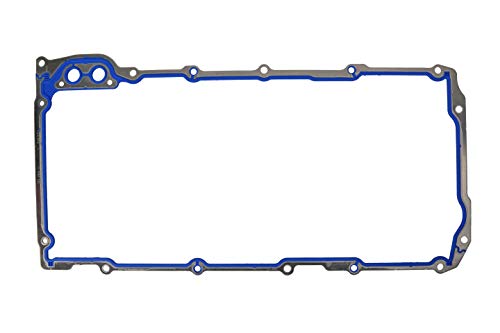 These typically last around 100,000 miles before they need to be replaced. Since the average vehicle lasts about 250,000 good miles, you’ll probably spend about $1690 in your car’s lifespan on replacing this part.

The lifespan of a gasket varies depending on how much wear you put on your vehicle. However, a valve cover gasket typically lasts about 35,000 miles. Therefore, you’ll probably spend about $1645 in your car’s lifespan on replacing this part.

The lifespan of an oil pan gasket varies depending on how much you use your vehicle. You may have to replace this part several times, meaning costs could range from $460 to several thousand dollars, on average.

Timing covers typically last the lifetime of the vehicle. However, if it for some reason fails, that will likely be the only time you have to replace it. This puts lifetime costs of replacing a timing cover around $1835.

There are many aspects of auto repairs that affect the overall cost of a repair job. When it comes to fixing a timing cover leak, there are several factors that may fluctuate the cost of this job and associated repairs.

How Many Parts Are You Replacing?

When it comes to a leak related to a vehicle’s engine, you never know firsthand how many parts will need attention in the repair process. As we’ve established, a timing cover leak may be related to issues with more than just the timing cover gasket.

If you have to replace the timing cover gasket, in addition to other gaskets or parts, your overall price of auto work could increase by hundreds or even thousands of dollars.

Are You Doing a DIY Job or Using Professional Labor?

Another factor that will affect the cost of timing cover leak repairs is whether or not you use professional labor or install parts yourself.

How Old Is Your Vehicle?

As noted earlier in the price comparison tables, repairs and replacements cost differently among different vehicle models. These prices can also fluctuate depending on how old your vehicle model is.

For example, when we look at the average cost of replacing a timing cover gasket for a 2000 Toyota Camry model, it’s about $440.

However, when we look at the cost for the same replacement for a 2015 Toyota Camry model, the price is closer to $2520 on average (prices based on Columbus, OH figures).

This is a huge cost discrepancy that is good to be aware of since owners of older vehicle models may have a lower price to pay for repairs.

Overall, the cost of fixing a timing cover leak will depend on what sort of damage has been done to the timing cover and its related parts.

On average, the cost to replace a bad timing cover gasket is around $845, while labor costs about $760 on average and the cost of parts is close to $85.

Costs will fluctuate depending on what type of vehicle you have, how old it is, and whether or not you use DIY labor. You may also have associated replacements to make for the oil pan gasket, valve cover gasket, and/or the timing cover.