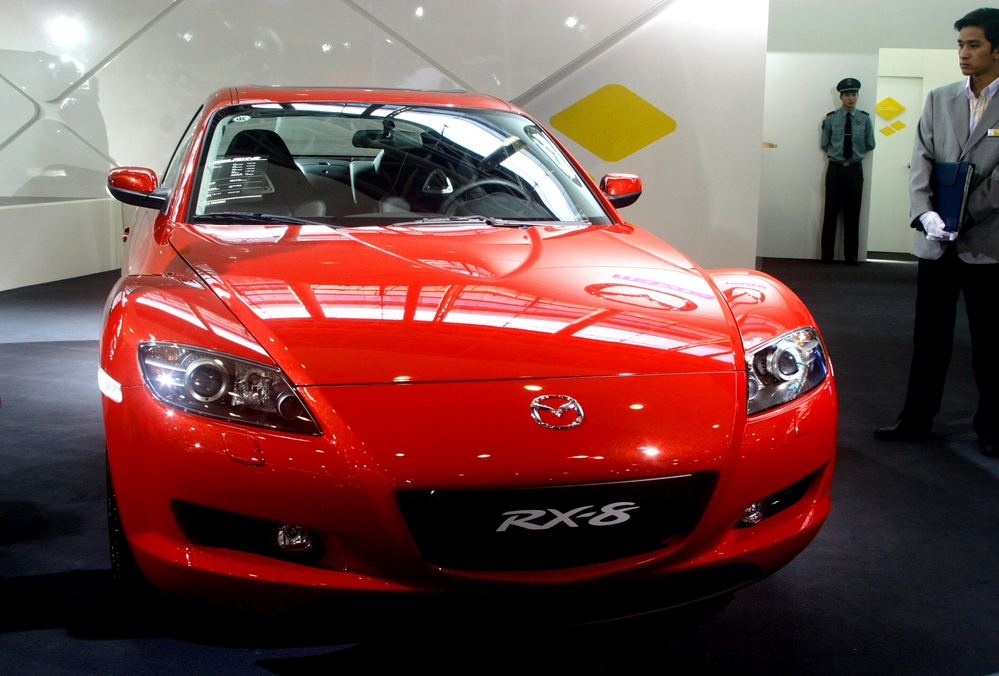 The Japanese car manufacturer Mazda stopped producing the RX-8 in 2012. If you love your RX-8 but notice a decline in performance, you may need to rebuild the engine. This notorious Mazda has a 1.3L RENSIS engine featuring Wankel Rotary technology.

So, how much does it cost to rebuild an RX-8 engine, and is it worth the money?

On average, it costs around $5,800 to hire a mechanic to rebuild your RX-8 engine and approximately $4,400 if you buy the parts and rebuild it yourself. Depending on where you live, you may pay a little bit more for the cost of labor.

You have two options when it comes to an RX-8 engine build. The first option is assembling the engine yourself, which requires various tools and a solid understanding of car engine components. The second option (and most popular) is to have a mechanic rebuild your engine. Sometimes a mechanic can salvage some of your old engine’s parts, making it cheaper than buying a brand-new engine outright.

Most Mazda owners hire a professional to rebuild their engine since it’s a relatively complex task. Attempting a DIY engine rebuild is often more challenging because you have to pay for tools. However, you can buy the parts ahead of time and save money.

Unless you have a well-equipped garage, hiring a mechanic to rebuild your RX-8 engine is typically the best route. Before you know it, your Mazda will be up and running again like the old days!

Before you rebuild your engine, it’s essential to know the different components of the RX-8 RENESIS engine. Let’s explore the critical parts of this engine so you can decide whether to build the engine yourself or pay a professional. We’ll also look at some of the most frequently asked questions when it comes to an RX-8 engine rebuild.

How Much Does It Cost to Swap an RX-8 Engine?

A complete engine swap is more expensive than rebuilding an RX-8 engine. If you decide to swap the engine, you’ll pay at least $12,000 or more depending on the engine’s specifications.

How Much Does a Mechanic Charge to Replace an RX-8 Engine?

How Long Does an RX-8 Engine Last?

Mazda discontinued the RX-8 in 2012, so if you haven’t upgraded your engine since you bought your car, you may need a rebuild. However, the engine longevity depends on how well you take care of the car. Generally, you can expect to get around 135,000 miles out of an RX-8 engine. If you take your Mazda in for routine maintenance, it’s not unheard of for the RX-8 engine to last more than 155,000 miles.

Key Components of an RX-8 Engine

The 1.3L RENESIS two-rotor rotary engine in the Mazda RX-8 is part of the Mazda Wankel family of engines. Many Mazda owners refer to these engines as “RENESIS.” If you rebuild your RX-8 engine, knowing the core components is imperative.

Fortunately, rebuilding an engine doesn’t typically require all new parts (you should be able to salvage some). Nevertheless, there’s a possibility you may need to purchase several of the below components of the RX-8 engine:

A thrust plate is a circular component with a hollow core (it resembles a wheel). This engine part is relatively inexpensive, costing around $30. Some Mazda owners have difficulties finding an OEM thrust plate and opt for one produced by a third party.

Fortunately, many auto part companies let you verify the part fits your engine using your vehicle’s VIN. Although we typically recommend purchasing a new thrust plate when you rebuild an engine, your old one could still be salvageable. Nevertheless, the price of a plate is inarguably negligent compared to some of the other engine components.

Front and Back Rotors

The RX-8 engine has a set of front and back rotors, both of which are critical parts of the RENESIS as it’s a rotary engine. A rotor has three concave sides, which help create a secure seal.

These rotors sit in oblong housing instead of standard pistons. And although their design isn’t typical, rotors carry out the same cycle as an internal combustion engine. Mazda’s engine rotors feature either cast iron or steel. In most cases, you’ll need to replace the RX-8 engine’s rotors if you do a complete rebuild.

An engine’s pressure regulator helps maintain consistent air pressure to ensure optimal functionality. However, the regulator does more than control the engine’s air pressure – it also works with the fuel injectors to ensure that they’re receiving fuel properly.

If the Mazda RX-8 needs significantly less or more fuel for some reason; the pressure regulator will do its job. The regulator has two primary chambers, allowing the engine to maintain an ideal fuel and boost ratio. Depending on the brand, a standard pressure regulator costs anywhere from $120 to $400.

A rear oil seal (also known as “rear main seal”) shouldn’t be confused with a synthetic or conventional oil change – it’s a seal and not oil. This seal is critical to the engine’s health because it seals the oil inside the rear portion of the engine.

If the motor isn’t sealed correctly with the rear oil seal, oil could leak from the area where the transmission connects to the crankshaft. Unfortunately, engine leaks can cause costly damage, especially if you don’t notice them in time.

It can take a mechanic several hours to fix a rear oil seal, depending on the extent of the damage. Thus, it’s essential to install a durable and secure rear oil seal in your RX-8 to boost the engine’s longevity and avoid leaks.

This additional feature caps the amount of oil flow that goes to the rotors in the cold. Furthermore, the RX-8 shaft is lightweight and features additional ground clearance. The average cost to replace the eccentric shaft is a couple of hundred dollars. However, replacing eccentric shaft sensors is much more expensive.

The standard manufacturer SKU is N3H1-10-B10C, and each housing unit costs approximately $840. You can expect to pay a couple of hundred dollars less for manual transmission housing. However, it’s important to note that the S1 and S2 engines have vital differences.

For example, the S2 engine’s housing must accommodate a different shaped oil pan and three oil injectors. Thus, if you use S1 housing for an S2 RX-8 engine, the bolts won’t align. Furthermore, the S2 engine housing has an additional coating that enhances its durability.

Needle bearings (also known as needle roller bearings) are an inexpensive yet vital component of the RX-8 engine. The needle bearings sit in a roller cage that accommodates engine connector rods. So, what exactly do these bearings do?

The primary purpose of needle bearings is to mitigate friction and control an automatic transmission input shaft endplay.

You can quickly fix a broken needle bearing with a clutch tool and an impact driver. However, they are highly affordable and will only set you back between $10 – $30. Since these engines components are inarguably cheap, many Mazda RX-8 owners prefer to get new ones when they rebuild their RX-8 engine.

Tubular dowels are affordable pieces of the RX-8 engine. You can purchase a set of four pins for around $40. You’ll also want to ensure to get your hands on a few tubular dowel fasteners, which retail for about $6 each.

Tubular dowels feature carbon steel that’s durable and long-lasting. You may also need a tubular dowel puller tool if you’re going to rebuild the engine yourself.

These easy-to-use tools cost around $20, and you can find them at various auto parts stores and online retailers. You can remove tubular dowels by hand, but it’s much easier to remove them using a puller tool. If you have a mechanic rebuild your RX-8 engine, they should already have this tool and not charge you.

A coolant seal is relatively similar to the engine’s Apex and rear oil seals. The primary purpose of a coolant sealer is to keep coolant from leaking after it flows from the reservoir to the engine and the parts within the engine that power the vehicle.

Various factors can cause coolant to leak, including a failed water pump, blown head gasket, and broken radiator cap. Although you can’t avoid a coolant seal leak altogether, an adequate seal can undoubtedly help.

Depending on where you live, you’ll end up paying around $600 and upwards to fix a coolant leak. However, a heavy-duty coolant seal may only set you back a couple of hundreds of dollars.

If you decide to rebuild an RX-8 engine yourself, you should ensure you choose a durable seal that will help you avoid coolant leaks. A little extra money up front is well worth it if you can avoid the expensive cost associated with repairing a leak.

The next item on our list of RX-8 components is apex seals. You might hear Mazda owners and mechanics refer to these seals as “scrapers” or “compression seals.” Most manufacturers treat these seals with heat for maximum efficacy.

These seals typically last between 70,000 to 130,000 miles, depending on the quality of the product. If you’re rebuilding your RX-8 engine, it’s probably best to get a new set of apex seals. You can purchase non-manufacturer seals for around $210. If you decide to buy stock apex seals, you can expect to spend about $300.

Want to learn more about the cost of rebuilding an RX-8 engine? Here are some of the most commonly asked questions.

How Much Does It Cost to Rebuild an RX-8 Engine?

You can expect to pay around $5,800 if you hire a mechanic to rebuild your RX-8 engine. On the other hand, rebuilding the engine on your own will set you back at around $4,400.

Is the RX-8 Rotary Engine Reliable?

Yes, the RX-8 rotary engine is reliable. As mentioned, the engine tends to last between 135,000 to 155,000 miles. Mazda has a solid reputation for creating high-quality vehicles that last for several years. Nevertheless, it’s your responsibility you take care of the vehicle.

What’s the Best Way to Maintain an RX-8 Engine?

You should change the engine’s filters routinely and drive smoothly (i.e., don’t brake too often or drive at inconsistent speeds). Furthermore, you’ll need to put in new timing belts and spark plugs. It’s also essential to refill the engine fluids as needed.

Can You Replace an RX-8 Engine at Home?

Yes, you can replace an RX-8 engine at home if you have the correct tools. If you’re not familiar with the engine’s parts, it’s best to have a mechanic replace the engine for you.

When Should You Rebuild an RX-8 Engine?

You should rebuild an RX-8 engine when you notice a decline in your vehicle’s performance or notice weird signs, such as chugging. We recommend having a mechanic look at your RX-8 engine before you decide to rebuild it so you can rule out the possible issues.

A Mazda RX-8 is a great vehicle, but you shouldn’t expect to get more than 155,000 miles out of its rotary engine. Although Mazda no longer makes the RX-8, you can keep your set of wheels by rebuilding the engine.

Rebuilding an RX-8 engine is relatively affordable compared to other car makes. If you hire a mechanic to rebuild the engine, you can expect to pay around $5,800. You can also rebuild the engine on your own for a little less at $4,400.