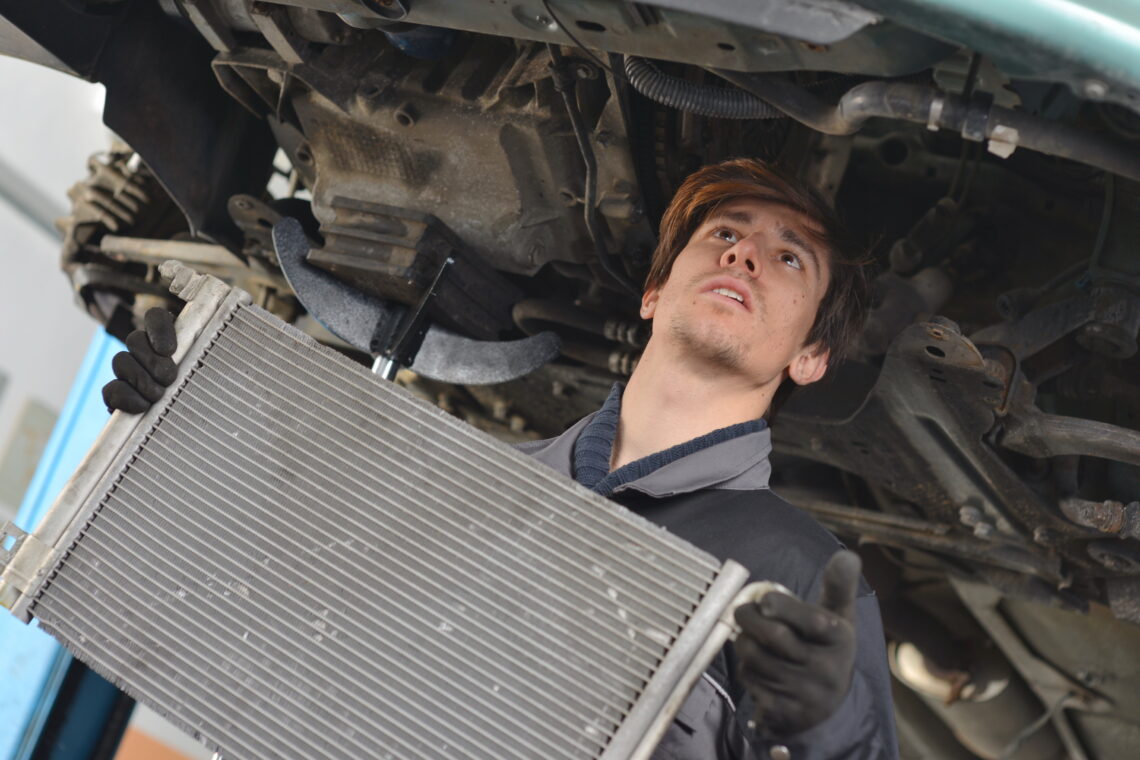 The radiator is an integral part of your vehicle’s cooling system which works to keep your engine at its optimal temperature. The radiator can fail as a result of physical damage (during an accident), corrosion, or wear and tear.

Unfortunately, fixing a radiator problem can be costly, and is not one that you can put off.

Replacing a radiator usually costs anywhere from $300 to $1,200 depending on the vehicle’s make and model. For most vehicles, a standard radiator replacement will cost an average of $600-$700. The radiator itself may cost anywhere from $150-$920.

The cost to replace your radiator will vary depending on the year, make, and model of the vehicle, as well as your geographic location. Whether you have the work done at a private mechanic’s shop or the dealership will also impact the cost.

The radiator itself is expensive compared to some other car parts, and it’s typically a labor-intensive job. The complexity of the work depends on your vehicle, which is why the cost may vary so drastically.

Cost to Replace a Radiator

The cost to replace the radiator in a larger vehicle (like an SUV, minivan, or large truck) is usually higher than the cost for a small car. Additionally, the cost for original vehicle manufacturer (OEM) parts versus aftermarket parts is usually much higher.

Cost for Parts to Replace a Radiator

The cost of the radiator depends on its size, features, and what it’s made of. For example, a basic radiator with plastic tanks and an aluminum core for a common, standard-sized vehicle (like a Honda Civic ) may cost $100-$120.

On the other hand, a large radiator with an internal transmission and oil cooler for a less common vehicle (like a Chevrolet 3500 diesel) may cost well over $350.

In addition to the radiator itself, your radiator mount, hoses and hose clamps, water pump, and other parts of the cooling system may also need to be replaced along with the radiator.

Typically, you should plan on replacing the water pump at the same time. A new water pump usually costs around $50 – $100, but the labor cost can increase that number significantly.

The total cost to replace a water pump is typically between $200 and $750, depending on the vehicle, but the labor cost should be less if you’re doing it at the same time as the radiator replacement.

Oftentimes, there may be other repairs that you need at the same time as the radiator replacement. Your service technician may find damage or wear and tear to other parts of your vehicle that need attention.

In other cases, it may just make sense to do other repairs at the same time because the service technician has easy access to the various components.

The type of coolant and how much your vehicle needs will also impact the total cost to replace the radiator. The cooling system will need to be drained before the work’s done and then refilled with coolant after the repairs are complete.

There are many different types of coolants on the market. Depending on where you live and how hot or cold the temperatures get, you may need a certain kind that’s specially made for the environment you’re in.

Coolant can cost anywhere from $12 to over $25 per gallon, and the amount that’s needed depends on the vehicle. For example, a small car like a Honda Civic only needs about one gallon, while some larger vehicles require closer to five gallons.

Cost to Replace a Radiator – Make and Model Comparisons

The price to replace your radiator depends heavily on your vehicle’s specific situation, however geographic location and your mechanic’s pricing will also impact the bottom line price.

Still, if you’re wondering how much you should expect to pay, this comparison will help give you an idea of what to expect when you take your car into the shop.

Here are some other price comparisons to replace a radiator in various common vehicles, based on a standard rate of $100 per hour for labor:

This vehicle requires about two gallons of coolant.

A 2007 Subaru Tribeca may cost between $315-$515 to replace the radiator. The radiator itself is priced at around $130, and the labor should be just under one and a half hours. This vehicle requires about two gallons of coolant.

Replacing the radiator in a 2012 GMC Acadia may cost between $900-$1,200. This job is more expensive because it requires removing the front bumper and additional internal components to reach the radiator.

The labor would take just under eight hours because of the complexity of the work. This vehicle also requires about two gallons of coolant.

A small truck, like a Toyota Tacoma (2006) may cost anywhere from $215-$450 to replace the radiator. This estimate is based on just under one hour of labor.

The radiator itself is priced between $90-$300 and the vehicle needs about two gallons of coolant.

Having your radiator replaced at a standard auto repair shop or muffler shop can save you some money compared to a dealership. On average, the job might cost $475-$500 at one of these service providers.

On the other hand, a dealership’s average price to replace a radiator is much higher. The same work would probably cost, on average, between $650-$700 at a dealership.

Let’s take a look at how some of the different mechanics and service providers compare to one another for replacing a radiator.

Of course, the vehicle information and the complexity of the job will have a big impact on how much it costs to replace your radiator, but this comparison can help give you an idea of what to expect.

For example, a private shop in Dawsonville, GA charged about $315 to replace the radiator, hoses, clamps, and thermostat in a 1995 Ford Escort.

To replace the radiator and water pump in a BMW 325, a shop in Allentown, PA charged $400.

A shop in Seattle, WA charged $493 to replace the radiator in a 2001 Toyota RAV4. However, in Hollywood, CA, another person paid $1,400 for the same repairs (plus an oil change) for the same type of vehicle.

In Stone Mountain, GA, a customer paid $285 to have the radiator and thermostat replaced in their 1997 Mercury Mountaineer.

A shop in Ybor City, FL charged $300 to replace the radiator and thermostat in a 1999 Toyota Tacoma.

So, you can see how much the price may vary from shop to shop based on geographic location.

How to Know if Your Radiator Needs To Be Replaced

Radiators often need to be replaced when it begins to break down due to corrosion or wear and tear, which is usually sometime around or after 80,000 miles. In other situations, the radiator becomes damaged due to a collision, which is more often the case.

Either way, there are some tell-tale signs that your radiator may be failing, meaning that you need to take it to get checked out as soon as possible.

Overheating can cause severe damage to many parts of your engine, including the radiator. If the radiator tank cracks due to overheating, the mechanic may be able to repair the tanks and thermostat and replace any damaged or faulty hoses rather than replacing the whole radiator.

Replacing a radiator hose typically costs around $50, so it’s a much more affordable repair than replacing the radiator.

Signs of radiator problems include:

Ways to Save on Your Radiator Replacement

While replacing your radiator will be an expensive repair, there are some things you can do to minimize the cost, even if it’s just a small amount.

One option is to do the work yourself if you’re able. The job is not a small one, but it’s pretty straightforward for anyone who has some knowledge and experience working on cars.

Most people spend anywhere from $100-$350 to replace their own radiator. However, the total cost may vary depending on what kind of vehicle you have and how expensive the new radiator is.

Here’s a breakdown of what you’ll need for the job and the cost for each:

If you just have one small leak in your radiator, you may be able to use a product designed to stop the leak. These “stop leak” products are only designed to be a temporary fix until you can get the car to a garage. Stop leak products typically cost between $5-$15.

However, you should use these products with caution, as sometimes they can cause more damage depending on what’s actually wrong with your radiator. Some professionals warn that they can cause clogs in the cooling system.

When it’s time to take your car into the shop, make sure to shop around and get several quotes to get the best price. The rates for labor can vary from garage to garage, and many auto shops will match competitor rates.

Use this guide to get an idea of the price range ahead of time so you know what to expect, and check reviews and information online about your local garages so you can make the best choice.

Be sure to ask about warranty coverage, as a good warranty can add value to the cost of the job.

Replacing a radiator can be a big expense, especially if it’s unexpected. However, if you know a price range to expect, it will be less of a shock when you get to the garage.

Your total cost for the job will depend on the age, make, and model of your vehicle. The kind of car you have will determine how complex the job is and how much labor will be involved.

However, you should expect to spend between $300 and $1,200 to replace your radiator. A standard radiator replacement will cost an average of $600-$700, but trucks, vans, and SUVs are usually more expensive.