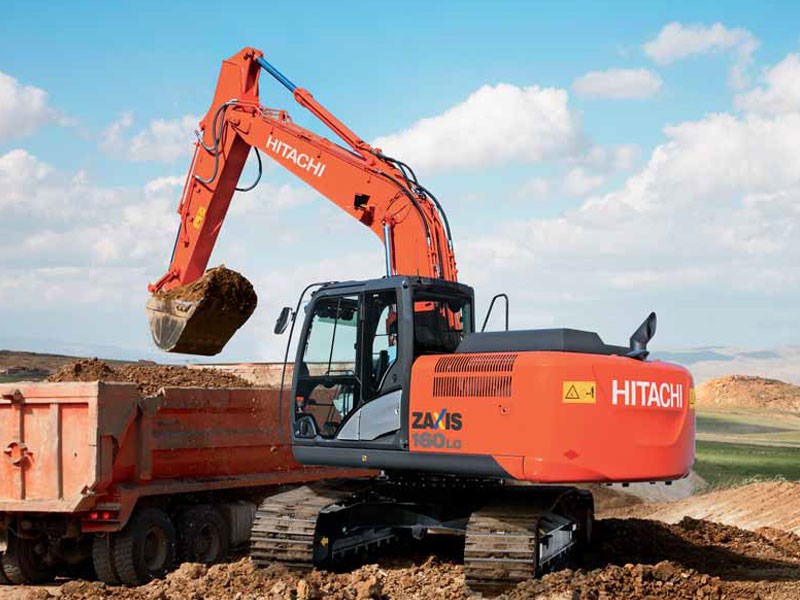 Hitachi is one of the leading manufacturers of excavators, competing with the likes of Caterpillar. The manufacturer is essentially renowned for producing some of the roughest, most durable, and cost-efficient machines for the construction industry.

Hitachi promises highly efficient, reliable, and durable machines with over 100 years in the business and a nearly 20-year partnership with John Deere.

Price For a New Hitachi Excavator

A new Hitachi excavator will provide you with the most updated technology and best options for fuel efficiency and enhanced features. Like purchasing a new vehicle, you’ll also pay top dollar for this equipment versus a pre-owned or earlier model.

The cost of the machine will mostly depend on the model, year, size, power, retailer, and geographic location.

Cost for a New Hitachi Excavator

Most new Hitachi excavators will include a standard manufacturer warranty which adds value to the cost. Hitachi’s standard warranty for most items is a two-year/2,000-hour full-machine warranty that promises they’ll fix any defects during that period.

Buying a used Hitachi excavator can save you thousands of dollars compared to a brand new machine. However, some used models are still priced at well over $100,000. Many of the same factors that impact the cost of new excavators also affect the prices of used models.

The model, year, size, power, weight, and hours of use will all influence the final asking price for a used machine. Where you purchase it (a dealer versus a private seller) and your geographic location can also have an impact on the cost.

Let’s take a look at some example prices for used Hitachi excavators.

For instance, a new Hitachi Zx200lc-3 excavator will cost you about $124,000 depending on your location. A new Hitachi Ex1200-6 excavator, on the other hand, is priced at about $580,000. The smaller models will be cheaper than these big machines. For instance, you should expect to spend about $110,000 on a new Hitachi Zx85usb-5 excavator.

Based on actual leasing by the leading dealerships selling used Hitachi excavators, you should expect to spend about $38,654 on a 2008 HITACHI ZX160 LC-3 excavator that has clicked 10313 hours of use. With Hitachi mini excavators, such as the Hitachi ZX35U-5N, a 2016 model that has clocked 100 hours of use will cost you about $48,900.

The cost for your Hitachi excavator may also vary depending on the features and attachments. If you purchase a new or used machine with just basic features, the price will be lower than one with add-ons and upgrades.

For example, additional buckets in different sizes are common (and expensive) attachments that you may purchase for your excavator.

You can also upgrade the bucket to a wider version, which may increase the cost by around $4,000 or more.

Let’s take a look at some of the other attachments and features that might increase the cost of your Hitachi excavator.

A trencher may be useful if you need to dig through rocky terrain. Trenchers will typically dig to a depth of 2-3 feet, and 4-12 inches across. A special trencher might be needed in order to trench very close to buildings and other structures.

A grading blade is a useful attachment for smoothing and grading a surface. They can be used to slope or contour the terrain, which may be necessary for completing your project. These attachments can be quite costly and may increase the cost of your excavator by $3,500 to as much as $14,000+.

An auger can help dig holes with precision. They dig holes ranging from 6-48 inches and can help to get the job done more efficiently and with less labor. These attachments are some of the most common for excavators, and they can add an extra $2-3k to your overall cost.

The special-purpose extra-large excavators by the manufacturer are known to sell for up to $1,000,000 when new. For old models, the buying price will b relatively low. In addition to the size and power rating g of the machine, the cost of used Hitachi excavators will also depend on how old they are.

The age of an excavator mainly depends on its hours of use. The more the hours of use, the more affordable you should expect the unit to be. In this case, an excavator that is two to three years old and with less than 1,000 hours of use will sell for about 25 percent less than it would when new.

It does not matter the excavator model you are interested in, with Hitachi, you can rest assured that you are getting the best quality. As you have learned above, the cost of these machines, whether new or used, will mainly depend on their model, year of production, power, and size.

A Hitachi excavator can be a valuable investment if you need to use the equipment on a regular basis. They’re a trusted name that specializes in excavation and hauling machinery. The cost of a Hitachi excavator primarily depends on the model, year, hours used, and location. It’s possible to get a used machine for under $40k, but you’re probably going to spend $50-60k and up for this equipment, with new machines costing well over $100k.

If you prefer renting an excavator instead, read our excavator rental cost guide.

Hans Engel is a seasoned heavy-duty expert with a specialty in cranes and forklifts. With over 20 years of experience, Hans has developed a deep understanding of heavy-duty equipment. Hans worked for an equipment rental company for the last 15 years.