How Much Does Flowmaster Exhaust System Cost? 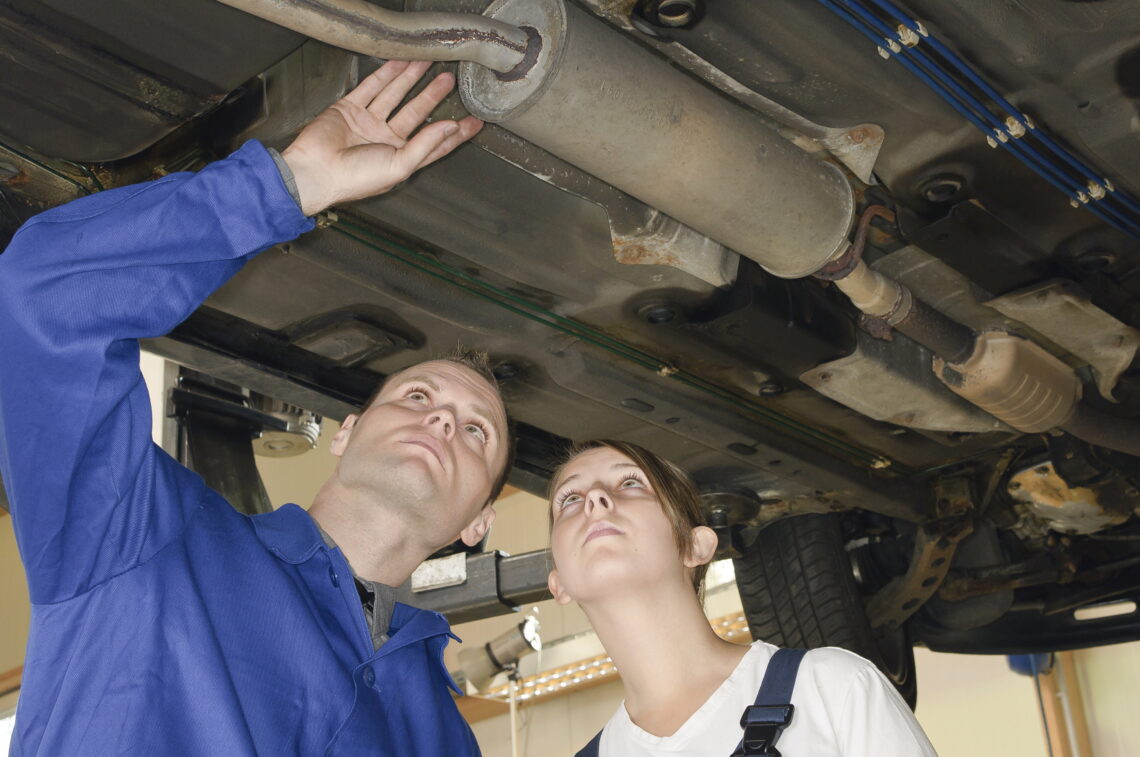 Founded in 1983, Flowmaster is an industry-leading car parts manufacturer. The California-based company now has a strong relationship with Holley, a performance products manufacturing company.

Nearly all Flowmaster’s products are available through Holley’s website.

The average price for a Flowmaster exhaust system is $834.35.

On the other hand, the most expensive is the Outlaw Series, boasting an average price tag of $1,275.

When considering the costs of all the exhaust systems that Flowmaster sells, the high-end price estimate is $1,392.60, and the low-end estimate is $275.60.

Note: this does not include the cost of labor, only the price of the exhaust system.

Average Cost of a Flowmaster Exhaust System Plus Installation

Unless you’re a skilled mechanic, you’ll need to hire a professional to install your Flowmaster exhaust system.

Below is an estimate of what you can expect to pay for the exhaust system plus installation costs.

The labor cost greatly depends on what type of car you own and where you are in the country. According to CarMD, California has the highest hourly car labor cost, at $148.

On the other hand, Vermont has the lowest hourly price at $124.

How Does the Cost of a Flowmaster Exhaust System Compare to Other Brands?

We used CARiD, an automotive parts company, to determine the average cost and the high-end and low-end estimates for other exhaust systems.

Some exhaust systems feature titanium, for example, which increases the price. The average cost of a Flowmaster exhaust system is $3,644.70 lower than competing brands. Although the savings seem substantial, remember that no two exhaust systems are the same.

Holley, the primary retailer that sells Flowmaster products, has frequent sitewide promotions with discounts ranging from 10 to 30%. Currently, you can get free shipping with the purchase of an exhaust system that costs more than $100.

Since an exhaust system can weigh up to 50 lbs., free shipping is a steal.

The Outlaw Series draws in drivers who want a thrilling exhaust with turbulent sounds. On the other hand, exhausts in the DBX Series are affordable options that perform well without going over the top.

Flowmaster’s Outlaw Series exhaust systems are a popular choice for sports car enthusiasts. Made with 409S stainless steel, these exhaust systems produce prominent sounds and are well suited for racers.

Because of the high noise level, the Outlaw Series is not for everyday street driving.

The Cost of an Outlaw Series Exhaust System

The Outlaw Series’ sound level ranges from aggressive to aggressive-moderate. This product line boasts both axle-back and cat-back system types.

And to ensure that these systems can accommodate a wide selection of vehicles, Flowmaster produces the exhaust systems in 2.5-, 3-, and 4-inch diameters.

Key Features of the Outlaw Series

As its name suggests, American thunder is another exhaust system that excels when it comes to sound. Dubbed the ‘original,’ American Thunder products have chambered mufflers to optimize performance and produce bold sounds.

The Cost of An American Thunder Exhaust System

Compared to the Outlaw Series, American Thunder is more versatile in regard to specifications. It’s available in cross member, cat, and axle-back system types.

Moreover, the tubing type ranges from 2.25 inches in diameter to 4 inches, with one-half increments in-between. The sound levels available include aggressive, aggressive-moderate, moderate, and moderate-mild.

The FlowFx exhaust system produces a moderate sound without going overboard. However, it’s still a popular choice for those who want the characteristic performance of Flowmaster’s products.

This system is only available in one finish – 409S stainless steel. Depending on the exhaust, some have a darker matte, whereas a handful feature a more titanium-like appearance

The Cost of a FlowFx Exhaust System

Even though FlowFx only comes in stainless steel, there’s still a bit of variety related to the system’s other specifications. Drivers can choose from aggressive, aggressive-moderate, moderate, and moderate-mild sound types.

There a two different exhaust types that Flowmaster sells – an axle and cat-back. The tubing diameter ranges from 2.25 to 3 inches.

Flowmaster makes this system for a variety of engine types, including 5.0L and 6.4L Hemi engines.

Regarded as one of the more conservative brands, the DBX Series exhaust system aims to reduce inside noise. Flowmaster designs these systems with four- and six-cylinder engines in mind.

Despite being for smaller engines, DBX Series systems still produce optimal performance and feature a clean stainless-steel exterior. The systems come with polishing tips that you can use to brighten the steel.

Compared to the more aggressive options sold by Flowmaster, the DBX Series is much more affordable.

The Cost of a DBX Series Exhaust System

Out of all Flowmaster’s exhaust system brands, the DBX series has the most limited selection – five products in total. The systems fit the Toyota Tacoma, Mazda Miata, and Dodge Dart.

Customers can select from aggressive-moderate, mild, and moderate sound levels. The systems only come in 2.25-inch and 3-inch tubing diameters.

Key Features of the DBX Series

The last line of exhaust systems by Flowmaster is Force II. With over Force II products available, this is one of Flowmaster’s most expansive product lines.

Force II exhaust systems are best suited for those who want a gentle sound for day-to-day driving. These systems won’t attract as much attention as the others.

The Cost of a Force II Exhaust System

Drivers can select from exhaust systems made from either stainless or aluminized steel. Moreover, the Force II system comes in mild, moderate, and moderate-mild sound levels.

The product comes in various system types, including axle, cat, cross member, and DPF back. Customers can choose from tubing diameters ranging from 2.25 to 4 inches.

Cost to Install an Exhaust System

The average cost to install a Flowmaster exhaust system is $165. This average cost assumes that you already have all the parts and hardware needed to install the system.

Many people won’t have the tools and equipment on hand to install it themselves. And while it’s possible to install an exhaust system yourself, we recommend paying a mechanic to do it for you.

Depending on the labor cost where you live, you could pay up to $250 or as little as $80 to install a Flowmaster exhaust system.

If you want to install a system on your own or if you’re just curious about how the process works, below are the installation steps.

Other Products Sold by Flowmaster

You can also find a variety of different car parts and accessories branded with the Flowmaster name.

Flowmaster sells mufflers for those that don’t need to replace their entire exhaust system. You can buy Flowmaster mufflers at various auto parts stores, including AutoZone and Advanced Auto Parts.

With a chambered design, Flowmaster mufflers give your car more power and noise.

Flowmaster sells roughly 50 different types of exhaust tips. Most of the tips feature a chrome or polished silver exterior.

The diameter of the tip ranges from 2 to 4 inches. Flowmaster manufactures various styles of tips, ranging from angle cut, dual-angle cut, and angled rolled edge.

Albeit not very popular nowadays, Flowmaster still sells a collection of gated shifters. The most popular shifter is the XDR Magnum Grip Gated Shifter.

This shifter features an ergonomic handle, black aluminum, and hardware that allows for easy setup.

As mentioned, Flowmaster sells virtually every component of an exhaust system, including X, Y, and H pipes. X-pipes are popular amongst those that want extra power, and H-pipes create a deep sound. On the other hand, the Y-pipe helps boost engine power.

The Flowmaster Delta Boost is an easy-to-use device with a Bluetooth application that’s compatible with both Android and iOS. With the tuner, you can tweak your engine’s boost between -4lbs and +4lbs., making it easy to personalize the horsepower.

A Final Glance at the Cost of Flowmaster Products

Best known for its wide selection of exhaust systems, Flowmaster offers car enthusiasts various auto performance parts for a fraction of the cost. The average price of a Flowmaster exhaust system is $834.34.

Compared to the competing average of $4,478.80, that’s over $3,500 in savings. On top of that, Flowmaster products often come with free shipping and generous warranties, making the purchase even a better deal.

You can buy Flowmaster products at a variety of retail outlets, both online and in person. To get the most for your money, always keep an eye out for frequent promotions.