How Much Does It Cost to Build a Portable Classroom? 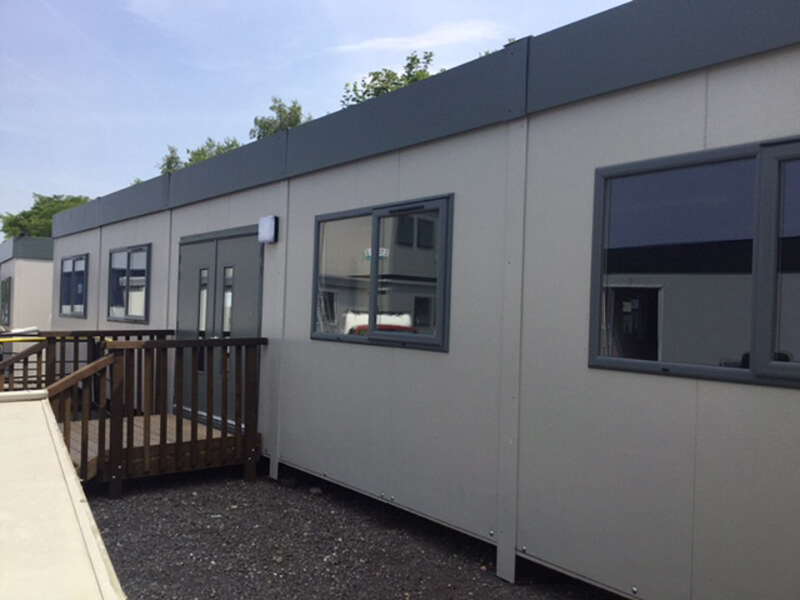 How Much Does It Cost to Build a Portable Classroom?

To determine how much it will cost you to build a portable classroom, you first must know the amount of space you’ll need. This information is dependent on the number of students who will occupy the classroom at any one time.

Portable classrooms are measured in square footage. If yours is a kindergarten through 12th-grade class, then each student must have at least 20 square feet of space according to Vanguard Modular. For special classes such as labs and art classes, you need to increase the amount of student space to 50 square feet apiece.

For the sake of simplification, we’ll assume that your portable classroom will not be used for labs and arts and crafts. In that case, using the requirement of 20 square feet of space per student, if you have 20 students in the modular classroom at a time, the building should be 400 square feet.

Business pricing resource 360Connect quotes the price of a modular classroom at $40 to $200 a square foot. Using that number as our reference, if you paid $40 a square foot for a 400-square-foot portable classroom, it would cost $16,000 to build. Yet if the costs were $200 a square foot, now you’re looking at a significantly higher expense of $80,000.

Here’s a handy chart that illustrates everything.

A Breakdown of the Cost to Build, Step by Step

Next, let’s go through the various steps you must follow to construct any building, from homes to portable classrooms. This section will cover the costs of such areas as acquiring permits, building the classroom’s foundation, adding windows and electrical, and more.

Creating Building Plans and Getting Permits – $3,068

You’re already saving money building a portable classroom since you don’t have to purchase land. As we discussed in our article on the costs to build a home, buying land alone can cost $90,000 for 22,000 square feet.

You’ll build your portable classroom on the school grounds, where there’s presumably already space. However, you still need building plans for the classroom, so that will be the first step of this process.

This isn’t a job that you yourself do unless you have an architectural background. Rather, you’d hire an architect or draftsperson. According to HomeAdvisor, draftspeople charge $50 to $130 an hour. Others may charge by the square foot. The range could be between $0.40 and $3 or $1.25 and $5.

The national average for this type of work is $1,741, which we’ll use as our figure going forward.

Next, you need the requisite permits. Even though your school may have permits already, those wouldn’t apply to the portable classroom. HomeAdvisor quotes the national average for permits as $1,327, although you could pay as much as $6,000 depending on the type of permitting required for the building.

With the classroom planned and a construction company selected, on the date that installation begins, the team will arrive at the school and break ground. Pouring concrete over the dug-out ground will form the foundation of the portable classroom.

Better Homes & Gardens says that foundational costs are around $10,000 for 1,200 square feet. Since the biggest portable classroom, you’d need is 600 square feet, you can safely halve that price.

With the concrete poured, next, the construction team will build the framework, usually out of plywood. This will create the structure for the classroom. This process begins with floor framing, then wall framing. The walls are then sheathed and raised using oriented strand board and plywood. When the frame is built, the construction team will add trusses that go atop the wall frames.

This part of construction can cost around $50,000.

After the skeleton of your building is done, it’s time to move on to make it more complete. This will entail installing the roof, walls, doors, and windows. The walls will receive siding before this happens.

Modular classrooms usually have a lot of windows. Modernize quotes windows alone from $150 to $750. Let’s say you have six windows in the classroom. The costs just to buy the windows would be between $900 and $4,500. Installing windows costs roughly $38 an hour.

The classroom needs doors too. For a single-entry door, Home Depot says the price is $398 to $798. One interior door is about $198 and may cost as much as $398. These prices do not factor in installation.

All this work is going to be costly, somewhere in the ballpark of $40,000.

The portable classroom requires both electricity and plumbing, even if the classroom doesn’t have a bathroom (which it very well may not). You’ll likely connect to the school’s power grid, which might reduce costs somewhat. The small size of the portable classroom also means fewer electrical wires to install, which requires fewer manhours and thus lowers your project totals.

The same applies to plumbing. The classroom can link into the school’s ductwork and pipes, which costs less money to do.

Before students can be welcomed to the portable classroom, it must be furnished for educational purposes. That requires purchasing a laundry list of items and equipment, among them projectors, a fire alarm, desks, and chairs. The building should have wheelchair ramp access as well as stairs, both of which are costly.

Factors Affecting the Cost of a Portable Classroom

Now that you’re clearer on what you’ll pay to build a portable classroom, let’s talk about the factors that drive up the cost.

First on the list is undoubtedly the size of your school’s student body. If you have smaller class sizes, then there should be no need to build a 600-square-foot portable classroom. Yet some schools might decide to play it safe and build bigger in case many students must use the portable classroom at the same time.

As we discussed earlier, those activities require more space per student, 50 square feet apiece versus 20 square feet. This affects the costs of the portable classroom drastically.

The other fees, such as planning for the building, permitting, and construction will likely be higher as well. Your school would need a much larger budget for the portable building.

When to Consider Building a Portable Classroom

Schools might decide to build a portable classroom for a multitude of reasons, so let’s discuss those now.

Portable classrooms, although they use electricity, require a lot less energy than a school. The average school size for 624 students is 84,700 square feet versus 400 or 600 square feet for a modular classroom.

The portable classroom doesn’t have as many computers or lights, so sending students to learn there allows the school to cut back on its utility costs. Our earth benefits as the school become greener.

In other instances, budget cuts might have forced the school staff to reevaluate how they’re using space in the building. They may decide to repurpose certain wings of the school, which will affect how those classrooms are utilized.

The teachers and their students that were in these classrooms can’t be displaced, so they’d be moved to the modular classroom.

The condition of the school itself can also necessitate a portable classroom. If a natural disaster strikes and the building was affected, it will take some time to rebuild. Students could continue their education in the portable classroom so the schoolyear can end on time.

Construction such as additions to the school is another situation where portable classrooms are a great stand-in.

It’s always a good thing when a student body grows, but if the influx was sudden, school staff might not be sure how to handle all these new students. Building a modular classroom or several will give everyone the space to learn without having to necessarily pay to expand the school.

How to Afford Building a Portable Classroom

Building portable classrooms might be less expensive than buying them premade (which can be around $90,000 if not more), but this is still a costly project. Depending on the exact total of the portable classroom, your school might be able to fund it yourselves.

If you find that you can’t, you should certainly take advantage of other options such as a home construction loan. These loans become a mortgage as the construction of the school wraps. Yet if your school is already paying for a mortgage on the building, you’ll have to think carefully if taking out what is essentially a second mortgage is the best idea.

What you might do instead is apply for a construction-only loan. As the name implies, this loan covers the costs of building the portable classroom. Your school would then be on the hook for paying back this loan.

Assuming a portable classroom requires 20 square feet of space per student, the costs to build this external structure are between $16,000 and $120,000.

Portable classrooms are a smart solution for schools with a growing student body or for those that want to increase their energy efficiency. If building a portable classroom is right for your school, now you know everything that goes into it!