Home > Business > Franchise > How Much Does a sweetFrog Franchise Cost?

How Much Does a sweetFrog Franchise Cost? 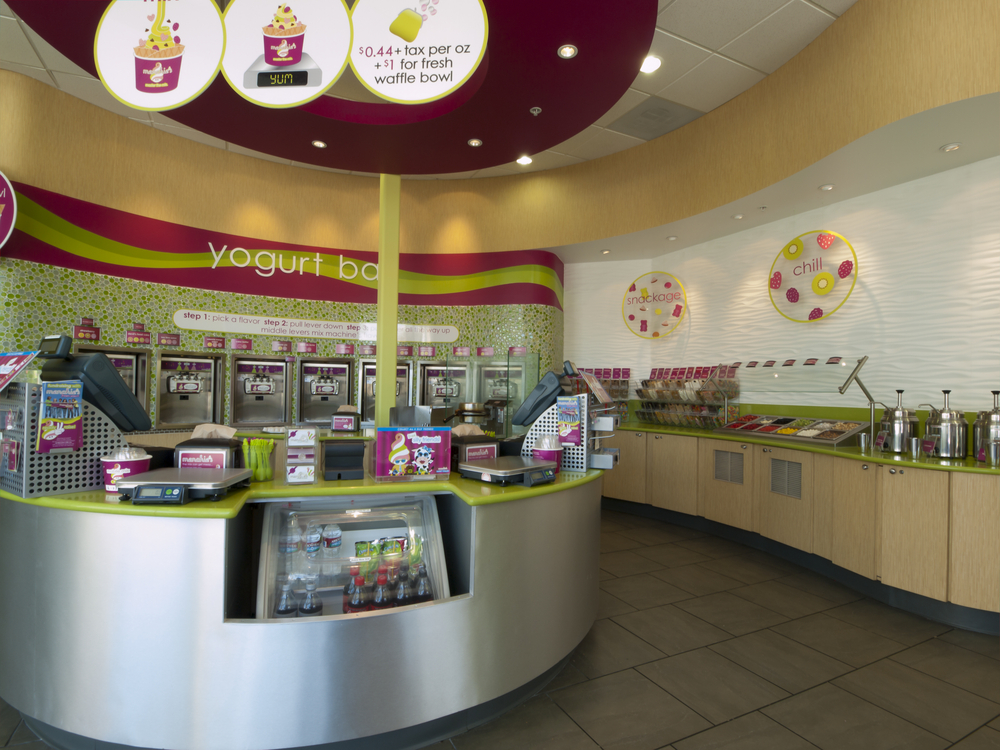 There are few things more refreshing than frozen yogurt topped with fresh fruit or mouthwatering chocolate. If you’re interested in turning your love of frozen yogurt into an exciting career, you may have looked into a few franchising opportunities such as sweetFrog. The fro-yo chain landed on Entrepreneur Magazine’s list of top new franchises back in 2017, and it’s only gone up from there, with more than 300 franchises across the U.S. Opening your own franchise is a definite possibility, but one that comes with some considerable upfront costs you should be aware of.

On average, a sweetFrog franchise costs $361,250. Most franchises cost between $239,500 on the low end and $483,000 on the high end. While this is an accurate average price range to help guide your decision, keep in mind there are many factors that influence the overall cost of investing in a sweetFrog franchise, including the location, leasehold improvements, furniture, and inventory costs.

How Much Does a sweetFrog Franchise Cost?

According to sweetFrog, the average cost to open a traditional new store buildout is $361,250, with an average range of $239,500 — $483,000. That may seem like a big price tag, but it’s competitive with other frozen yogurt franchises that make up the nearly $1 billion global market.

The total sweetFrog franchise cost depends on building improvements, business system setup, furniture and signage. The labor and material costs to finish the upgrades can also factor into your final budget. Although the initial franchise fee is $30,000, most franchise owners spend $105,000 — $190,000 on leasehold improvements and another $56,000 –$145,500 on machines, furniture and fixtures.

A Breakdown Of sweetFrog Franchise Cost, Step By Step

Founded in Richmond, Virginia, in 2009, sweetFrog is a frozen yogurt retail chain with over 350 stores across the U.S. Let’s take a closer look at the different aspects of starting your own sweetFrog franchise and the associated costs.

Whenever you open a franchise, whether it’s a frozen yogurt shop or clothing store, there’s an initial fee involved. The franchise fee is essentially a fee to join the franchise. This upfront fee gives you permission to use the franchise name and business systems, plus gives you access to adequate support and resources from the parent company. If you look at other franchise owners near you, they all paid a similar fee to get their business started.

With any franchise, the company sets the franchise fee. The cost of the sweetFrog initial franchise fee is $30,000 and is the first step to make your dreams of owning a frozen yogurt shop a reality.

Leasehold improvements are changes made to a building by the lessee. When you scout out the perfect location for your sweetFrog franchise, you need to carefully evaluate the space and begin planning what changes you will need to make to bring your business to life. Common examples of leasehold improvements include installing partitions or countertops, painting the walls, upgrading the flooring, or installing custom light fixtures. Putting in new bath fans, cabinets, tile and grout, or awnings are also popular leasehold improvement projects.

As part of your fixed assets, leasehold improvements are usually one of the highest expense categories when starting a new frozen yogurt franchise. Considering the large price tag, it’s usually a good idea to get your accountant or financial advisor involved to help keep track of the leasehold improvements and understand the financial implications. Start with your initial evaluation of the property and go from there. If the retail space was previously used as a restaurant, there may be fewer leasehold improvements necessary than if it’s a brand new commercial space that’s unfinished and needs more work.

Once you’ve factored in leasehold improvements, it’s time to think about the machines, furniture, and fixtures required to finishing fitting out the space. Of course, the main requirement is frozen yogurt machines, preferably high-quality ones that can handle thousands of orders a day. Commercial soft-serve machines often cost thousands of dollars, plus you need to get them professionally installed to ensure the proper connections to the kitchen.

Other costs to think about include the interior design elements. How big is your seating area and how many chairs and tables do you need? What about the toppings counter where customers get to customize their premium frozen yogurt? This is really where you need a solid business plan to understand how much you should spend to properly fit out your franchise location before opening the doors to the community.

Finally, frozen yogurt shop fixtures may include lighting, wall décor, and kitchen safety equipment. All up, you can anticipate paying $56,000 — $145,500 for machines, furniture, and fixtures to complete the frozen yogurt storefront.

After the main leasehold improvements are completed and the best self-serve fro-yo machines are installed, it’s time to think about your opening inventory. sweetFrog premium frozen yogurt currently comes in 91 flavors. Flavors vary by location, so it’s up to you how many you wish to carry. The bigger your selection, the higher your cost, but the happier your customers may be with a wider variety of fro-yo flavors to choose from. When considering your final flavor selection, check how many flavors your self-serve machines can dispense, so you know how many flavors you can choose total.

Your sweetFrog opening inventory also needs to cover frozen yogurt toppings. There’s plenty to choose from when stocking up your toppings bar, with more than 50 options across fresh fruit, chocolate, nuts & cereals, snacks and sauces. Consider your projected sales and how much inventory you need to hit your goals. Don’t forget about the sweetFrog cups, utensils, and any other packaging or promotional material needed for your first few months in business.

The main cost considerations for the grand opening of a sweetFrog franchise include operating expenses, such as hiring and training new staff, as well as advertising and any special additions. If you’re planning to have balloons and giveaways, this may add a few hundred or even several thousand dollars.

While the price may vary slightly depending on your sweetFrog grand opening plans, generally you can expect to pay around $10,000.

Every successful business needs a reliable point-of-sale system, and sweetFrog frozen yogurt shops are no exception. You need to install sweetFrog’s approved POS system and ensure your registers are ready to go and accept payment from the moment the doors open. The number of registers at your check-out station will influence the total cost. If you have a small shop with one or two registers, your budget can be a bit smaller than if you are going all out with three, four, or five registers.

Finally, before your franchise setup can be complete, you need sweetFrog signage. This branding is extremely important for brand recognition that generates foot traffic and sales to happy, hungry customers with sweet tooth cravings. The sweetFrog logo sign includes the trademark pink “sweet” and green “Frog” text, as well as the pink and white premium frozen yogurt sign and Scoop and Cookie mascots.

Things To Keep In Mind About sweetFrog Franchising

These costs are the official franchising prices provided by sweetFrog on the company’s official website. Prices are based on a traditional new store buildout, and costs will vary for other sweetFrog franchise options as outlined in the Franchise Disclosure Document. Also, make sure you do your research on any royalty and advertising feeds over the 10-year initial franchise agreement.

sweetFrog has dedicated franchise development consultants who help prospective franchisees through the process. When accessing this support and guidance, remember to give yourself some extra breathing space in the budget just in case anything unexpected arises. The more funds you have to work with, the smoother your franchise setup can be.

How To Afford Your Own sweetFrog Franchise

sweetFrog franchise cost estimates are extremely helpful in guiding your business decision-making, but prices do vary depending on the property, where the franchise is located, and your overall business plan. For example, starting a sweetFrog franchise in a location that was previously used for frozen yogurt or ice cream may involve fewer leasehold improvements and furniture/fixture costs, compared to an existing space that needs to be entirely converted.

The material and labor costs of any required building work may vary based on demand and availability in your region, too. With so many possible variations in costs of opening a sweetFrog franchise, a budget outlining your current finances is key. While sweetFrog does not offer financing, there are alternative options if you don’t have a few hundred thousand dollars in liquid capital.

sweetFrog is on the pre-approved SBA (Small Business Administration) Registry, which helps to secure external financing to put your frozen yogurt franchise plans over the finish line. Your sweetFrog development consultant can help you understanding financing options such as home equity, lines of credit, 401k rollover and self-guided IRAs.

While the initial franchise fee is $30,000, most sweetFrog franchise owners spend $239,500 — $483,000 to get their new business off the ground. This cost range gives you a general idea of how much to budget for, but remember there are many factors that determine the final franchise cost. The average franchise cost of $361,250 may be higher or lower depending on how much work you put into the new location and the licensing costs for your region.

In addition to leasehold improvements, machinery, furniture, and other grand opening costs, you also need to think about the pros and cons of investing in a franchise. Consider the amount of time involved in starting and operating a business, and the continued operating costs once it’s up and running.

At the same time, there is plenty to be excited about, with the possibility to make a good profit and fulfill your dreams of opening a frozen yogurt business. Weighing up any potential challenges, as well as the upfront investment costs, can help you decide whether now is the right time to invest in a sweetFrog franchise.

Brent McOlson, a seasoned small business owner and expert in all aspects of business operations. With over 20 years of experience, Brent has a proven track record of success in managing and growing companies.