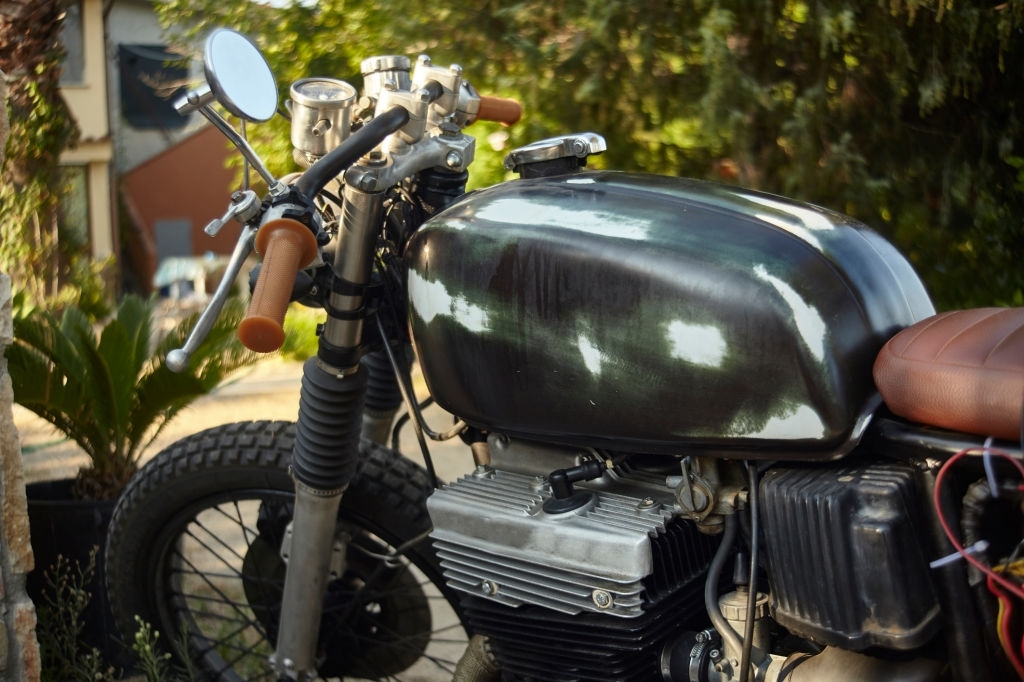 A dent in your motorcycle’s gas tank can take away a significant amount of its aesthetic appeal. Unfortunately, motorcycle gas tanks are typically made from thin pieces of metal, which makes them relatively easy to dent.

If you have a dent in your gas tank, you may be wondering how much it would cost to repair it.

Typically, this is a job that will be easy for someone to do themselves. If you know the right techniques and have the right tools available, it should not cost you more than $100.

However, if you would rather have a body shop technician do the job, it will probably cost somewhere between $200-$300.

Below, we’ll discuss the cost of repairing a dent in your motorcycle’s gas tank, as well as some popular DIY methods you may like to try. Keep reading to learn all you need to know!

How Much Does It Cost to Repair a Motorcycle Gas Tank Dent?

There are quite a few ways that you can repair a dent in your gas tank on your own. As long as you have the skills and knowledge to do this repair, the total cost of the tools and supplies should not exceed $100.

However, some people would rather be safe than sorry. You don’t want to take the chance, do it wrong, and damage your gas tank beyond repair.

If you are not 100% confident that you can do it properly, it’s best to have a trained technician at a body shop repair the tank for you.

The prices that body shops charge can vary significantly. Depending on where you live, as well as the make and model of your bike, a professional repair will typically cost between $200-$300.

A third option you have is to replace the gas tank altogether. This is a good choice if you would rather not take any risks with a DIY repair, but don’t want to pay the premium cost of having it repaired professionally.

A new gas tank will typically cost around $100-$200, but you will have to take your time to find one that matches your bike well.

Is it Dangerous to Drive with a Dent in Your Gas Tank?

As long as there are no creases in the metal of your gas tank, it is still okay to drive your motorcycle. Because of the gas tank’s size and where it is located on your bike, dents in this area are relatively common.

A small dent will not cause any problems, but you’ll want to check a larger one or one that removes paint and causes creases, for leaks.

If the gas tank is leaking, it is important to take precautions and replace the tank as soon as possible.

What if Your Gas Tank is Leaking?

A puncture caused by a dent is, unfortunately, not exactly uncommon. The gas tank on a motorcycle is typically made from thin pieces of steel or aluminum. Both of these materials are very susceptible to denting, rusting, and punctures.

If you discover that your gas tank is leaking, it’s very important that you get it fixed as soon as possible and refrain from driving until you do. In this situation, replacing the tank is often a better solution than repairing it.

First, you will need to drain your gas tank completely. Let all the gas run out into a bucket or gas can, and then, let the residual gas inside evaporate.

Leave your gas cap off, and pour some rubbing alcohol into the tank to help with the evaporation process.

Once all the gas has drained out and evaporated, it’s time to remove the tank. You should always follow your owner’s manual to learn the exact process for doing so.

However, a gas tank can usually be taken off by using an adjustable wrench to remove the gas tank bolt. Replacing a leaking gas tank is your best course of action.

While you or a body shop technician may be able to repair it, it’s best to not take any risks. Purchasing a new gas tank may even be cheaper than repairing the old leaking one!

What are the Best DIY Dent Removal Techniques?

If you believe you have the know-how to repair your dented gas tank on your own, there are a few different DIY methods you can try.

Some of your options include

Before you use any of the techniques listed above to restore your gas tank, you will need to ensure that the tank is completely empty.

Drain out all of the gas, using a bucket or gas can to catch what pours out. Then, pour some rubbing alcohol inside the empty tank and leave the cap off.

Rubbing alcohol helps to speed up the evaporation process because it is soluble in gasoline. Let it sit for at least a few hours, or until all the fluid inside has completely evaporated.

The dent removal technique you should use depends on the size and shape of the dent in your tank. In addition, you should consider your level of experience and the tools you are willing to purchase. Below, we will discuss what each of the above methods entails.

Removing a Dent with Heat

If your gas tank has a small dent, you will probably be able to pop it back into place with an extreme temperature change.

To do a DIY repair in this way, you will need either a heat gun or a hairdryer, as well as some freezing spray.

First, heat up the area with your heating tool of choice. Immediately after this, spray the dent with your freezing spray.

This extreme temperature change should allow the dent to pop right back into place, due to the memory of the metal.

Removing a Dent with a Hammer

Using a hammer is probably the most complicated of all the DIY dent repair techniques. Here, you will need to get a hammer or similar tool inside of your gas tank in order to bang out the dents.

This method is often quite difficult for the average person. In most cases, the only opening into your gas tank is the gas cap. Because this is usually quite small, you may have trouble getting something like a hammer inside.

However, rewards come along with hard work! While it is difficult, this is essentially a surefire way to remove a dent.

Removing a Dent with a Dent Repair Kit

Dent repair kits are often available for purchase either online or at an auto parts store. These kits typically include one of two types of “pullers”: a suction dent puller or a glue dent puller.

Suction dent pullers are shaped like small plungers and work similarly to them. You attach the suction cup to the dent and then pull the cup towards you to pull the dent out.

Glue dent pullers have a flat tab that attaches directly to the dent. Once the tab is attached, you twist the handle to pull the tab up and away from the dent.

It should be noted that dent repair kits typically work best when used on small, shallow dents. They’re not usually recommended for deep or angular dents.

Removing a Dent with an Air Bag

This trick will work if you have a small inflatable airbag, such as a blood pressure cuff. You’ll have to stuff the uninflated bag inside the tank, then slowly inflate it. In most cases, the pressure of the bag will cause the dent to pop out.

This trick should restore the tank back to its original shape. If you need an alternative to a blood pressure cuff, you could also try using the inner tube to a small tire or an inflatable pillow.

Restoring a Dent with Body Filler

If all else fails, or if the dent in your tank is too large or oddly shaped to remove using any of the above techniques, you could try body filler. This product typically comes as putty or a paste.

While it will not pop out the dent, it will solve all the aesthetic issues caused by a dented gas tank.

You can use the filler to restore the dent, then use car body paint to match the color once it has dried. This is one of the most inexpensive ways to ensure the gas tank is fully restored to its former glory.

Having a dent in your motorcycle’s gas tank is an unsightly, but thankfully, relatively simple and inexpensive fix. If you choose to repair the tank yourself, you should not have to spend any more than $100 on all the materials.

Body shops, on the other hand, are infamous for their high prices. Different shops charge different amounts, depending on what type of motorcycle you have.

However, you can generally expect to pay anywhere between $200-$300 for a gas tank dent repair.