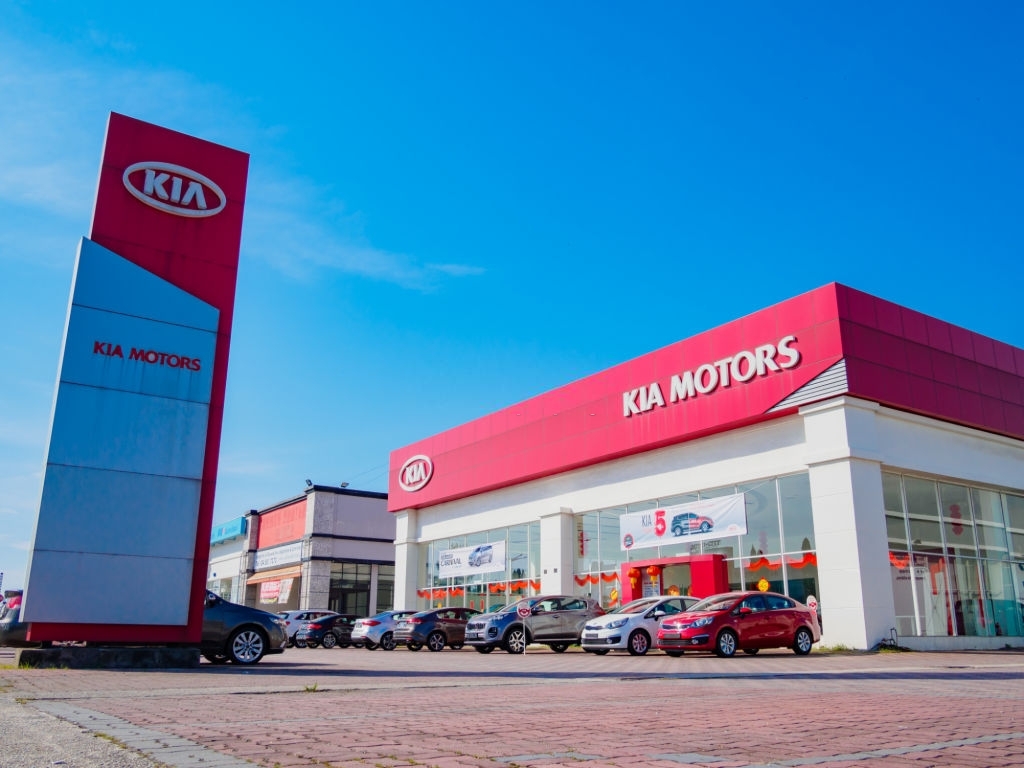 South Korea is one of the largest automobile exporters in the world. In terms of total car production, the country ranks seventh at approximately four million vehicles annually. Auto manufacturers in South Korea export their cars to countries worldwide, including the United States, Canada, Germany, and Australia. There are a few companies that dominate the market.

We looked at every car brand in South Korea and came up with a top ten list. After a careful review, we concluded that the top three Korean car brands are Hyundai, Kia Motors, and Daewoo Motors. Hyundai and Kia have an extensive global footprint with a significant presence in the United States. On the other hand, Daewoo Motors is a nostalgic brand that considerably impacted the Korean automotive industry.

Want to learn more about the top ten Korean car brands? Here’s a look at our findings:

Hyundai Motor Company (Hyundai) is one of the most well-known Korean car companies. The brand is based in Seoul and was established in 1967. Hyundai is notorious for making sleek and fuel-efficient vehicles, such as the Accent, Elantra, and Sonata.

The company has slowly shifted strategy and is now producing more hybrid and electronic cars, including the Elantra Hybrid that can get up to 56 MPG on the highway.

The brand has something for everyone – SUVs, sedans, and compact vehicles. Hyundai’s new cars start at roughly $26,000 for basic trims, however, higher-end vehicles like the Santa FE Plugin-Hybrid go for around $40,000.

Used Hyundai vehicles are also highly affordable and can cost as low as $5,000, depending on the mileage, year, and model.

The Seoul-based company strongly emphasizes safety and has received stellar ratings from various organizations. For instance, the Insurance Institute for Highway Safety granted numerous Hyundai vehicles a TOP SAFETY PICK – the Veloster, Elantra, Sonata, and Tucson, to name a few.

If you’re in the United States – one of Hyundai’s largest markets – you’ll have no trouble finding a local Hyundai dealership. The Korean company also has a strong presence in Europe and China.

The Most Popular Hyundai Cars

Another Korean car brand with global recognition is Kia Motors. In fact, Hyundai purchased Kia after Kida went bankrupt in 1997. However, Kia is a stand-alone brand, and many consumers don’t associate it with Hyundai.

Nevertheless, both brands have a wide variety of vehicles at reasonable prices. Kia’s goal is to create cars with stellar technology while incorporating continuous innovation and teamwork.

Some of the brand’s most significant core values include putting customers first, respecting the diversity of cultures, and embracing challenges.

The brand’s basic trims include advanced features, such as a rear-camera display, Android Auto, and heated outside mirrors. And just because Kia is an affordable brand doesn’t mean it sacrifices safety.

The Most Popular Kia Cars

Genesis is Hyundai’s luxury line primarily sells posh sedans with premium trims. The most affordable Genesis vehicle is the G70, with an MSRP of approximately $38,000. For $10,000 more, you can get the Genesis G80 – an 8-speed sedan that’s available in three different trims.

The most expensive Genesis is the G90 sedan, which costs $75,000. This sedan features 365 horsepower, a 17-speaker audio system, and a forward collision-avoidance assist.

Hyundai’s Genesis line entered the United States market in 2016. Today, you can find a limited selection of Genesis vehicles at Hyundai dealerships.

You can also build your own Genesis with all the bells and whistles you desire. Overall, Genesis is a solid choice if you’re looking for a luxury sedan under the $80,000 price point.

The Most Popular Genesis Cars

” C&T United once planned to expand manufacturing operations into the United States, but the company pulled the plug after poor financial results.

Unfortunately, you’d be hard-pressed trying to find a C&T United vehicle in the United States. It’s not clear if C&T is still producing electric cars as the company doesn’t have a significant digital presence.

However, you may come across a C&T eZone, eVan, or cZone in residential areas of South Korea and Japan.

The Most Popular C&T United Cars

The next brand on our list is Daewoo Motors, a company with roots dating to 1937. General Motors purchased the company in 2001 and changed the name to “GM Korea.” Nevertheless, Daewoo Motors played an important role in South Korea’s car industry, and we think it’s worth mentioning.

Some of the brand’s most notable models include the Nexia, Leganza, and LeMans. Daewoo Motors produced these vehicles in the 1980s and 1990s, and they had stylistic elements very similar to Chrysler models and Toyotas.

In the late 80s, the company started to produce Italian-designed cars, such as the Espero and Tico.

You can find Daewoo vehicles in the United States, but they’re far and few between. Many cars date back to the 80s or 90s and only cost a couple of thousand dollars.

According to the company’s website, the brand is an industry leader in South Korea and manufactured the country’s first luxury car. Furthermore, SsangYong Motor Company sells its vehicles at roughly 1,700 dealerships in over 125 countries.

The company planned to launch in the United States in 2020 but delayed it due to unforeseen circumstances. According to company executives, the company is still working to penetrate the United States market. As of now, SsangYong Motor faces stiff competition from Kia and Hyundai.

The Most Popular SsangYong Motor Cars

It sells sedans, crossovers, SUVs, small electronic vehicles, and even vans. Renault Samsung also has a small market share in Chile and the Philippines. Nonetheless, Renault Samsung has a lot of competition from Hyundai and Kia – two of South Korea’s largest automobile manufacturers.

Although the company has seen sales decline over the last few years, it continues to innovate in the electric vehicle space. The Busan-based company launched an all-electric car called ZOE in 2020. Not only that, but the company has continued to evolve by opening a car-sharing service.

Ioniq is an electric car brand by Hyundai. The company dubs the car as the most “fuel-efficient in America.” An Ioniq Hybrid has 139 horsepower and can get up to 60 MPG on the highway. All Ioniq vehicles have Apple CarPlay capabilities, touchscreen displays, and forward collision avoidance assist.

This line of cars is relatively inexpensive, with the MRSP starting at just over $23,000. Ioniq is part of Hyundai’s long-term goal of becoming a carbon-neutral company by 2045.

Want to buy an Ioniq in the United States? You’re in luck – you can purchase one from your local Hyundai dealer. Hyundai also offers leases that start at $200 per month.

The Most Popular Ioniq Cars

The next brand on our list is GM Korea Company – a subsidiary of the USA-based General Motors. The American automobile entered the Korean market when it acquired Daewoo Group. GM Korea is the third-largest automobile manufacturer in the country, behind Hyundai and Kia.

The company boasts two manufacturing facilities that make component kits and parts for GM vehicles, such as the Malibu and Equinox. Nevertheless, GM Korea still sells its vehicles in South Korea (primarily Chevrolet and Cadillac).

In addition to its manufacturing facilities, GM Korea has an ample research and development center where employees tackle the latest engineering projects. All in all, the company employs around 9,000 individuals in South Kora.

The Most Popular GM Korea Cars

Coming in at number ten on our list is CammSys Corp., a relatively new company to the electric vehicle industry. The company’s main line of business is its camera modules. However, the company announced that it would expand its business and enter the micro-car space.

The first model was the Cevo-C. Before this announcement, the company released multiple concept cars, including the PM100 and TX700e. CammSys plans to sell its small electric vehicles for around $12,500, which is quite a steal compared to other cars on the market.

Customers have already preordered the Cevo-C, but it’s unclear when the vehicle will be available. We don’t think you should expect any of CammSys’ cars to hit the American market anytime soon.

The Most Popular CammSys Corp. Cars

Want to learn more about Korean car brands? Take a look at the most frequently asked questions:

Why are Korean Cars Cheap?

Many Korean car manufacturers make their metal instead of buying it from suppliers who mark the price. Korean manufactures tend to use practical finishings and materials without going overboard.

What is the Most Expensive Korean Car?

Genesis – Hyundai’s luxury line – is likely the most expensive Korean car brand. The most costly Genesis is the G90 which retails for roughly $75,000.

How Many Korean Car Brands Are There?

There are approximately 15 Korean car brands (excluding brands from North Korea). However, it’s a bit difficult to develop an exact number since many brands have merged or closed over the years.

Which Korean Car Is the Best?

Hyundai’s vehicles consistently rank the highest out of all the Korean car brands. Hyundai has an extensive global reach and emphasizes research and development. Some of the best Hyundai vehicles include the Sonata, Accent, Tucson, and Elantra.

What Is the Fastest Korean Car?

The fastest Korean car is the Hyundai Genesis Coupe, which can reach a maximum speed of 168 mph with its 3.8-liter V6 engine. Moreover, it only takes the car 5.4 seconds to reach 60 mph. Unfortunately, Hyundai stopped making this two-door sports car in 2016. If you want an alternative to the Hyundai Genesis Coupe, the Genesis G70 is a sold option.

Ultimately, the answer to these questions boils down to the particular brand. Korean cars are not necessarily better than Japanese cars and vice versa.

Some Japanese brands that some may see as superior, such as Toyota and Honda (two makes known for longevity). However, Kia and Hyundai have continued to receive higher safety ratings. The two auto manufacturers are continuously creating new, innovative vehicles.

Most people instantly think of Hyundai and Kia when you mention Korean car brands. These two brands are indeed the best in Korea, considering their wide selection of makes, high safety ratings, and innovative technologies.

Honorable mentions include Genesis (Hyundai’s luxury brand), GM Korea, and SsangYong Motor. If you’re new to the Korean car market, we highly recommend checking out the brands on our list – you might be surprised by the deals you can find!