How much does an Aston Martin cost? 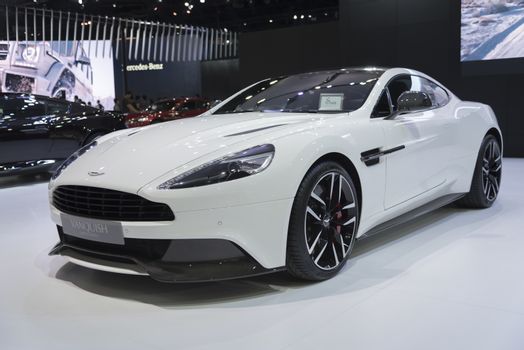 Aston Martins have an average price of $205,000. However, the cost might change based on many things, including the model of the car, year, features, and the dealer from whom you are purchasing. Prices range from around $139,000 to $3 million depending on the vehicle.

In this article, we will take a look at the costs of owning an Aston Martin, we will also look at the factors that affect the pricing so you can make better decisions when purchasing the vehicle.

Whether you are interested in purchasing an all-new Aston Martin DBX or want to trade up your historic DB11 for a newer model, you will want to know the price you will have to pay.

Here are some sample prices of each Aston Martin model as well as its features.

The DBX is the first SUV to come from Aston Martin and is built on an entirely new architecture. An entirely new suspension framework was built specifically for the SUV performance, which was designed keeping in mind the high standards set by the brand.

The Aston Martin Vantage roadster has a starting MSRP price of $152,995, and it has great road contact and the ability to turn corners.

Be prepared to be blown away by the sheer athletic power of this model that was inspired by racing, particularly if you choose to upgrade to the performance AMR version. This impressive car can go from 0 to 62 miles per hour in 3.6 seconds thanks to its 4.0-liter dual turbocharged v8 engine.

The Aston Martin BD11, with its timeless appearance and starting manufacturer’s suggested retail price of $198,995, sets the bar for a whole new generation of luxury vehicles.

This is the most fuel-efficient coupe version of the DB11 that Aston Martin has ever produced, and it’s available now. The new 2020 Aston Martin DB11 is an advancement on this iconic series, including more power and performance, in addition to improved driving characteristics. You have the option of selecting between the 4.0-liter twin-turbocharged V8 or the 5.2-liter twin-turbocharged V12 engine.

The DBS Superleggera is located smack dab in the middle of the very best that Aston Martin has to offer.

The sturdiness of the vehicle is matched by its ultra-light build, and the driving experience is made elegant and well-balanced by the vehicle’s explosive power on straightaways. Bespoke Pirelli P Zero tires, a 0-64 mph pace of 3.4 seconds, the Coupe and Volante body types, and 715 brake horsepower are some of the amenities that are included at the MSRP price of $304,995.

The 2020 Rapide AMR sports car expands on the previous model with improved performance and crisper driving characteristics. It boasts a full package of chassis, power, and cosmetic enhancements with a starting MSRP of $240,000.

The Aston Martin DBX is the first-ever SUV produced by the premium brand, and the manufacturer’s suggested retail price for it begins at $179,986.

Highlights include a 4.0-liter twin-turbocharged V8 engine with 542 horsepower and 516 pound-feet of torque. This vehicle upholds the Aston Martin traditions of beauty, elegance, and driving dynamics. In addition, it can go from 0 to 62 miles per hour in 4.5 seconds, and its top speed is 181 miles per hour.

The manufacturer’s suggested retail price (MSRP) for this sports vehicle begins at $139,000.

Notable features include a 4.0-liter twin-turbocharged V8 engine that produces 503 horsepower and 505 pound-feet of torque, a top speed of 195 miles per hour, and an acceleration time from 0 to 62 miles per hour of 3.6 seconds.

There is no such thing as a comprehensive list of Aston Martin automobiles with price points that do not include the Aston Martin DB11. This amazing machine has a base price of $205,600 MSRP.

In addition to that, it can accelerate from 0 to 62 miles per hour in 3.7 seconds and has a top speed of 208 miles per hour. Other characteristics include dynamic settings that may be selected by the driver, such as GT, Sport, and Sport Plus modes.

The manufacturer’s suggested retail price (MSRP) for the Aston Martin DBS begins at $316,300. So of course, you should expect maximum performance with this model.

The Aston Martin Valkyrie, a timeless automobile with a manufacturer’s suggested retail price (MSRP) that begins at $3 million, brings the line-up of Aston Martin vehicle models to a close.

It is the very first hypercar ever produced by Aston Martin, and it fulfills every conceivable need and desire. Because there will only be 150 road vehicles produced, this model is about as special as they get. This version is equipped with a 6.5-liter V12 engine with a 1,140-horsepower rating, hybrid technology as a well as a carbon fiber body.

Which Aston Martin Should You Buy?

If you are interested in purchasing something that is just a few years old, the DB11 will give the most value for your money, even if it does not provide you with the best quality. The more accomplished, focused, as well as powerful DBS is a quarter-million-dollar vehicle with options, though, pushing you into some fairly rarefied terrain as you go into that zone.

The vehicle that is currently garnering the most praise from the media is the new Aston Vantage. The new Vantage is an attractive and well-appointed entry-level Aston that is powered by a supercharged 5.0-liter AMG V8 to devastating effect. This is a sports vehicle that comes close to challenging the dominance of the much more expensive supercar establishment at its price point of close to $140,000.

Trying to find a vintage Aston is a whole other scenario. The most coveted DB4s and 5s are now selling for well over a half a million dollars or more. At the other end of the scale, though, the despised DB7 is a savvy purchase due to its low price. Easily usable despite its advanced years, gracefully aging, and available to you for the cost of a luxury subcompact hatchback.

Aston Martin company is well known for producing incredible sports vehicles, each of which comes with a permit to excite. The average price range for an Aston Martin is $205,000. Depending on the model you are choosing, you may pay a lower or higher price than the average cost.

Michael is leading the costhack Team. The Costhack team includes business owners, automotive mechanics, heavy duty equipment operators, and other business experts. Our goal, at Costhack, is to help business owners and consumers save money by avoiding hidden fees.