Home > Automotive > How Much Does a Head Gasket Repair Cost?

How Much Does a Head Gasket Repair Cost? 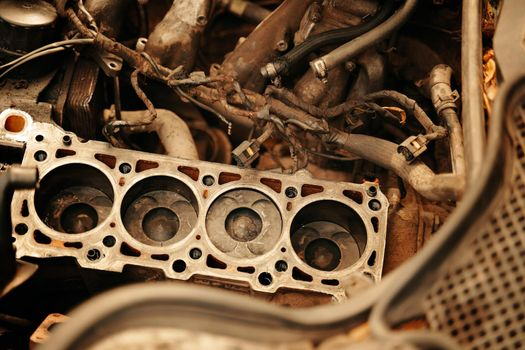 A blown head gasket is the absolute worst-case scenario for any driver. If you are beginning to notice the telltale indications of a head gasket leak, you need to have it fixed as soon as possible to prevent having to pay for expensive repairs in the future. But, how much does it cost to repair the head gasket?

In this article, we will discuss the cost of repairing a head gasket in detail and all other factors that are related to the process.

How Much Does a Head Gasket Repair Cost?

The price of repairing a blown head gasket may easily go into hundreds, or thousands, of dollars. Because of this, you may decide that purchasing a new car is a better option than paying for expensive repairs.

The high expenses associated with repairing a blown head gasket are typically due to the time and labor involved. Diagnosing the problem and performing the head gasket repairs or replacement is time-consuming and labor-intensive.

Since the engine head has to be removed and then reinstalled after being changed, changing the blown head gasket on your vehicle is a very complex process. And the longer the technician is working on your head gasket replacement, the more expensive the cost will be.

The prices listed below are some examples of the typical expenses associated with checking head gaskets on popular vehicles:

These prices are for the inspection and diagnostics; beyond that, you should plan on spending at least ten hours of labor in addition to the expenses of the necessary components and supplies.

Gaskets themselves often come at prices that are relatively affordable, and the high cost of repairs is typically attributable to the extensive amount of labor put in by the mechanic over the course of several hours.

For this reason, it is better to spend the money on that examination so that you can be positive that the problem is the head gasket and not another issue that may be repaired for a cheaper cost.

If you put off coming to the repair shop for a longer period of time, you can anticipate paying a higher fee to have your vehicle back on the road. Where you take your car for the work will also have an impact. Even though there shouldn’t be much of a difference in the rates that are provided to you, it is still a good idea to acquire a few different estimates from different area mechanics so that you can be sure you are getting the best deal possible.

It is hard to miss the indicators that a head gasket failure has occurred since they are so obvious. The engine will suffer from significant overheating, a significant amount of steam will be released from the car’s exhaust system, and the engine will either misfire or run poorly. In some cases, the engine won’t start.

Having one or more of these problems is a clear indication that there is a head gasket problem, and it also indicates that it is necessary to either repair or replace the item. If you put off getting this done, you might end up with damage or possibly a broken engine.

What happens during a head gasket replacement?

When you are considering the expenses and projects associated with head gasket replacement, bear in mind that the replacements themselves are uncomplicated. Because the job requires so much disassembly and reassembly, it is often one that takes a significant amount of time to complete.

The following steps make up the standard method:

It is important to bear in mind that a preliminary analysis of the problem is an integral component of any work that involves replacing the head gasket since it is possible that the head gasket is not the source of the issue. Potential causes include faulty rocker covers, exhaust, a broken cooling system, or something else entirely.

What Causes a Blown Head Gasket?

While you are driving, the internal combustion engine in your vehicle generates a great deal of heat. The head gasket is put through a lot of heat and mechanical stress when there is a difference in the rates of thermal expansion between the cylinder head and the engine block. This causes it to gradually wear out, which may result in fractures and leaks.

Both the natural vibrations that are produced by your engine and the vibrations that are created while you are driving may, over time, have an effect on your head gasket. Stretching the bolts that secure the head gasket between both the engine block as well as cylinder head may lead to increased friction and premature wear.

Damage to your head gasket may be caused by overheating if you let the coolant level in your engine drop too low. It is common for a head gasket to rupture due to overheating if the engine’s block and cylinder head aren’t being cooled by coolant.

How Can You Determine If Your Head Gasket Has Blown?

Evaluation of your vehicle may be improved and made more precise by performing a test to determine whether or not the head gasket has been compromised. You may check for blown head gaskets using any one of the following four methods:

After the engine has cooled down, take off the lid that covers the oil filler and look inside and around the cap for a liquid that has a coffee-like tint. If you see this, it indicates that the coolant and the oil have been mixed, which indicates that the head gasket has failed in its job of separating the two liquids.

After removing the spark plugs and pressurizing the cooling system, start the engine of your vehicle so that you may check it. A bad head gasket is indicated by the engine coolant pouring out of one or more of the spark plug holes.

Combustible gases are able to readily infiltrate your cooling system if your head gasket fails to seal properly. This would be shown by the presence of air bubbles in your radiator. Take off the cap of your radiator and let the engine of your vehicle warm up before looking for bubbles. The presence of bubbles in the tank is one of the first things you will notice if your head gasket has failed.

You shouldn’t put an end to your testing just yet. The gasket might catch fire anywhere between the two cylinders in the majority of situations. To do a compression test, you must first remove the spark plugs from the engine and then manually thread the cylinders. Start the engine of your vehicle, and while it’s running, check the readings on your compression tester to see how each cylinder is doing. When two cylinders that are next to one another provide the result “0 psi,” this is a sign that something is wrong.

Is It Really Necessary to Replace the Head Gasket?

Repairing a vehicle’s head gasket is an essential automotive service. The length of time that is required to complete the repair is the primary contributor to the head gasket replacement being such a costly operation.

In some instances, the total cost of the repair might reach more than $2,000. The make and model have a big effect on price because that will determine how difficult it is to reach the head gasket and do the work.

In some cases, you may not want to spend the money on such costly repairs. For example, if it’s an older car and you were thinking of getting a new one anyway, you might be better off trading it in than fixing it.

Because a head gasket is necessary for the functioning of an automobile, we strongly advise that you have it fixed as soon as possible.

Depending on the make and model of your vehicle, the parts cost of a replacement head gasket will range anywhere from $100 to $200. However, the labor cost is the most important portion of the total expenditure.

This labor cost will change drastically based on the type of vehicle, in addition to a number of other considerations. You should prepare yourself to spend between $900 and $1500 on labor.

You shouldn’t forget to consider the fact that if the head gasket blows, it might cause other parts of the engine to get damaged. Because of this, the head gasket cost might wind up being much greater. So don’t wait if you suspect a problem with your head gasket.