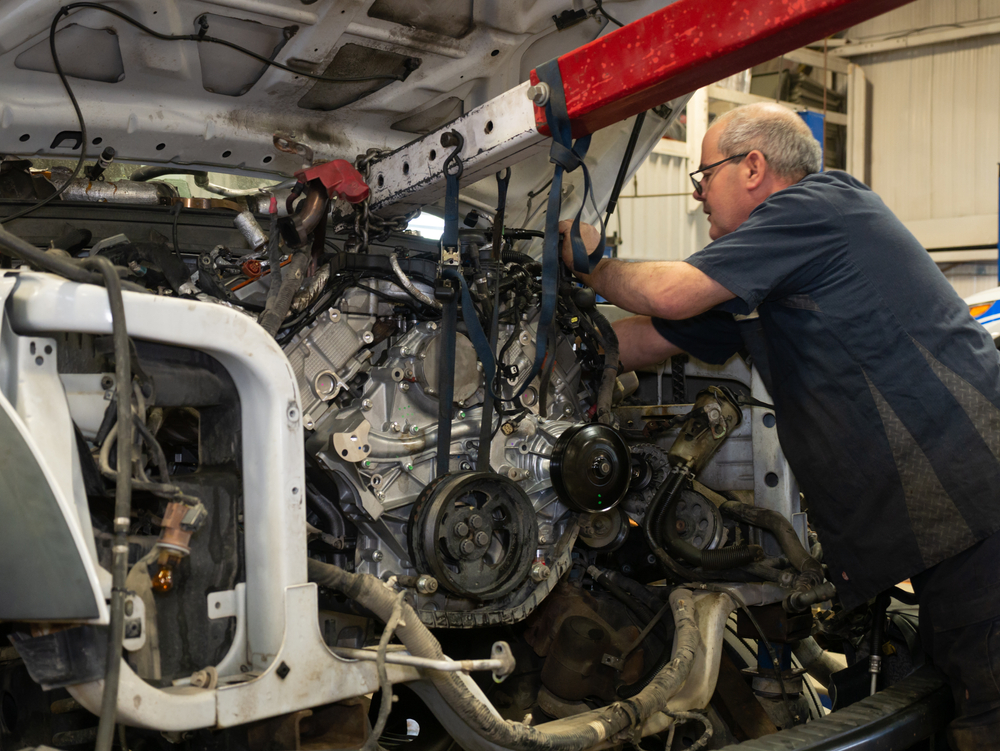 Engine swap cost V6 to V8. That is what’s on the mind of just about anyone who has a vehicle with a busted V6 engine. If the engine is bad and needs to be replaced, why not spend a little more to convert it to a V8? But really, what does it cost to swap an engine from a V6 to a V8.

The average price to swap a V8 engine into a vehicle with a V6 can run anywhere from $3,200 to $7,000, depending on the type of vehicle. Vehicles such as trucks and SUVs have a lot more space available to install larger engines.

Cars, on the other hand, have more cramped engine bays. For this reason, the labor to upgrade a larger vehicle to a V8 will always be lower than for a smaller vehicle. Another price-driving factor is whether or not the vehicle in question has a stock V8 option. This is because vehicles that offer a factory V8 engine already have the necessary provisions to support a V8 engine.

In this article, we will explain the differences between a V6 and V8 engine. We will also detail the total engine swap cost to replace a vehicle’s V6 with a V8.

What Is A V8 Engine?

Throughout the history of automobiles, the V8 engine is the most iconic and sought after. This is because for many decades, all car manufacturers had a V8 engine as the top engine option in all of their cars.

A vehicle engine is made up of multiple cylinders that all power the same crankshaft. As you would expect, a V8 engine has 8 total combustion chambers. Those chambers are arranged in 2 pairs of 4 cylinders that form a 90 degree V configuration.

Later, as fuel became more expensive and people were made more aware of climate change, smaller engine configurations were introduced and became dominant.

Can I Replace My V6 Engine With A V8?

When it comes to space, more than likely. This is because V6 engines are pretty wide compared to 4 cylinder inline engines. So, if a V6 engine fits in your engine bay, then chances are a V8 can as well.

It’s important to consider, however, that V8 engines are also a little wider than a V6, and we will explain why in more detail later in this article.

Yes. While it’s true that with enough modification, you can put a V8 in anything, it’s easiest to install a V8 engine in a car that already has a V8 as an option. For example, if you have the 6 cylinder version of your car but they made a V8 model, then it will be much easier for you to replace your V6 engine with a V8.

Swapping out a small V6 with a large V8 engine would provide the vehicle with a substantial power increase at the expense of fuel economy. An engine swap is when a car’s original engine is replaced with a new one. The new engine does not necessarily have to be more powerful than the old engine, but it usually is.

Engine swaps are sometimes performed to get older vehicles back on the road. Most of the time, however, an engine swap is carried out to engine the performance of the vehicle. Either way, many more other modifications are required to make a v8 engine work in a v6 car.

What Has To Be Changed To Convert A V6 To A V8?

When swapping a V6 engine to a V8, there are many auxiliary costs other than the engine itself. Many changes have to be made to the vehicle for it to be able to support a larger engine.

In modern vehicles, this means completely replacing the engine computer. In most V8 conversions, however, older engines that don’t require computers or require only simply external computers are often used.

How Much Does A V8 Engine Swap Cost?

While the price to convert one vehicle from a V6 to a V8 will vary widely based on many factors, it generally costs about $3,200 to $7,400 on average.

How Much Does It Cost To Put A V8 Engine In A Car?

The cost to put a V8 in a given vehicle ranges from $3500 to $7000+ on average. The cost depends on the type of vehicle that the engine is being installed in. For example, a vehicle that was designed to only accept a 4 cylinder engine will cost much more than a V6 to convert to a V8.

This is because most V6 vehicles have factory V8 options. This makes wiring and placement much easier. If the job is easier to perform, then it’s going to cost less because it will take less time.

What Vehicles Can a V8 Easily Be Installed In?

How Much Does It Cost To Install A V8 Engine?

Is It Worth It To Put A New Engine In A Car?

In most cases, if a car has a blown engine, it’s not worth replacing. This is because more often than not, the total parts and labor cost to replace an engine in a car will cost more than what the vehicle is worth.

This can be mitigated, however, if you upgrade your vehicle’s engine in the process. It’s easier to justify a large expenditure to get a car running again if the process of getting it back on the road also provides it with more performance than it had before.

What Makes A V6 Engine Different From A V8 Engine?

This is an important aspect to consider when swapping a V6 to a V8. This is also why it’s a bad idea to just cut 2 cylinders off the back of a V8 and call it a V6, but that is exactly what GM did when they developed the 4.3L Vortec V6. So, as you would expect, most vehicles that use the 4.3L V6 Vortec are relatively easy to swap over to a V8.

Another major difference between a V6 and a V8 is smoothness. With 2 more cylinders, a V8 is able to apply power to the wheels 2 more times than a V6 can per RPM. This means that power delivery is smoother in a V8, and a V8 will have to run at lower RPMs than a V6 to produce an equal amount of power.

If you are the unfortunate owner of a Ford Mustang with a V6 engine, it has one of two motors. If it’s an older Mustang, it’s going to have a 3.8L pushrod V6. If it’s a newer Mustang, it will be a 4.0L DOHC V6.

For Mustangs that have the 3.8L engine, it’s very easy to swap in a 4.6L V8. This is because the Mustang GT already uses the same 4.6L V8 engine. This makes it really easy to swap a V6 to a V6 because there is plenty of space and most of the hookups for it are already there.

If you want the same convenience but have a 4.0L V6 mustang, it’s easier to upgrade to the new 5.0L engine that Ford already offers in the GT version of that year of the Mustang. The 5.0L V8, however, is much more expensive than the older 4.6L V8.

Just about any high performance Dodge V8 engine swap is going to use the 5.7L Hemi. There are many different versions of this engine, from simple carbureted versions all the way up to advanced fuel injected models.

The route you choose will depend on your needs and your budget. In most cases, however, a Dodge Challenger V6 engine is swapped with a DOHC fuel injected 5.7L Hemi V8.

When swapping a Chevy Silverado V6 to V8, most people go with the 350 cubic inch (5.7L) big block chevy engine. This engine has been used for decades and like the 5.7L Hemi mentioned above, comes in many forms.

Unlike the Hemi, however, most Silverado engine swaps end up using the older carbureted 5.7L V8 Chevy engine.

Sure, it’s an old, simple engine, but that is what makes it such a popular drop in. They don’t need a computer, so you can basically put a 350 in anything that has enough room. Even without advanced fuel injection, the big block Chevy 350 V8 engine makes more than enough power for just about any application.

The average price to swap an engine from a V6 to a V8 ranges between $3,200 and $7,000. The price to swap a V6 to a V8 depends heavily on the type of vehicle it is being installed in. Larger vehicles cost less in labor to have the job done because there is more room to work in. Also, vehicles that already have a V8 option cost substantially less to swap. This is because vehicles that offer a V8 option already have the mount points and other provisions needed to install a V8 engine.

We hope this article helped you gain a better understanding of what it costs to perform a V6 to V8 engine swap.