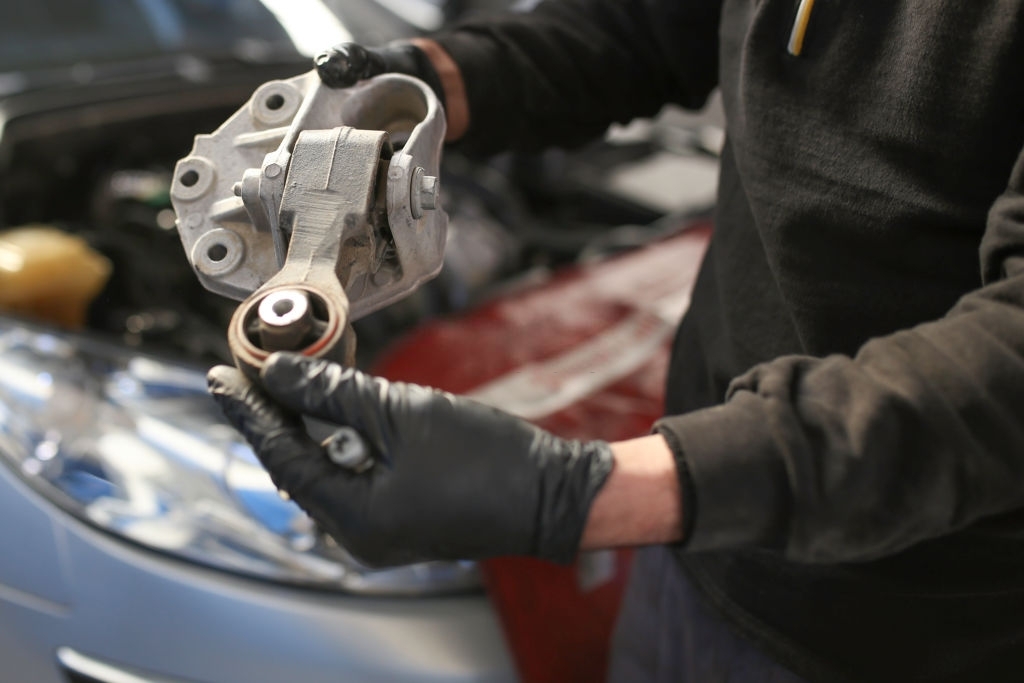 The engine mounts on your Honda Accord hold the engine and transmission in place. They also function as shock absorbers by preventing excessive shaking of these parts while the vehicle is in operation.

Engine mounts, also called motor mounts, are clearly an important part of your vehicle. It is therefore essential that you have them replaced when they become damaged.

If you decide to replace your engine mounts in your own garage you can expect to pay around $100 in parts. If, on the other hand, you decide to employ a mechanic to do the job, you will have to pay for labor.

Looking at the average labor rate nationwide, you will likely pay around $370 in total for parts and labor to have your engine mounts replaced in your Honda Accord.

What Causes a Broken Engine Mount?

There are multiple reasons why you might wind up with a broken engine mount in you Honda Accord.

Although it is not very likely, you may simply have a defective engine mount. It doesn’t happen often, but it is more likely if you have recently installed new engine mounts and soon thereafter notice problems.

The most likely reason that you may have a damaged motor mount is simply time. The more you use your vehicle the more everything is bumping, shaking, and vibrating.

But How Long Do Honda Accord Engine Mounts Generally Last?

Depending on which make you have, Honda Accord drivers can likely expect to notice motor mount issues after about 6 years of ownership.

The more aggressively you drive your Honda accord, the more stress you put on your engine mounts. When you accelerate quickly, you cause the engine to produce more torque.

How Do I Know If I Need to Replace the Engine Mounts in My Honda Accord?

There are a few clear signs that the motor mounts in your Honda Accord are beginning to fail. Any one of them can be a cause for concern, and the more of them you notice at the same time, the more likely it is that you need to do a replacement.

If the engine mounts in your Honda Accord are damaged, your engine may be banging around in the engine bay, slamming into any number of things, most likely your car frame.

This looseness can cause various sounds including humming, squeaking, clanking, or even buzzing.

If you notice loud sounds coming from the engine bay of your Honda Accord, you should act quickly to diagnose the problem.

If the engine mounts are broken and the engine is bumping into other parts, you may eventually be subject to numerous costly repairs.

If the engine mounts are not working properly, they may no longer effectively absorb shock from the operation of the engine. If this is the case, you may notice excessive vibrations while you operate your Honda Accord.

This can happen regardless of speed, and even while in idle.

Engine mounts are filled with oil, so if they are damaged, they may leak oil. If you notice an oil puddle under your car, there are numerous potential causes, but one of them is certainly engine mount damage.

If any of the above signs are apparent while you are driving your Honda Accord, you should inspect your engine mounts for damage. If they are broken, they will only continue to get worse.

What Can Happen If I Don’t Replace My Engine Mounts?

Many people drive around with damaged engine mounts. While it is true that these parts are constructed with fail safes engineered into them, it does not follow that you should continue to drive with a known issue.

Yes, some people are lucky enough to be able to drive their Honda Accord with broken engine mounts. On the other hand, other people have tried to do the same thing only to have their engine and transmission drop out of the bottom of their vehicle on the highway.

Essentially, you are gambling, and you are putting yourself and others in danger by choosing to drive around with damaged motor mounts.

Broken Engine Mounts Cause Damage to Other Parts

If the engine in your Honda Accord is not properly mounted, it will cause vibrations and stresses in other areas of your vehicle. Further, since it is not perfectly aligned, it will throw off other connected systems.

The longer this goes on, the more damage you will notice in other areas of the car. Over time this can grow quite costly.

You cannot repair your engine mounts; you must replace them. If you notice symptoms indicative of engine mount damage while you are driving your Honda Accord, act quickly to have them repaired

Are Honda Accord Engine Mounts Easy to Replace?

Engine mounts can be difficult to replace. If you catch the damage soon enough, you might be able to get away with replacing only one.

Depending on whether you decide to replace all at once or one at a time, this difficulty may be multiplied.

Replacing all Honda Accord Engine Mounts at Once

If you decide to replace all the engine mounts at once, you will be best suited by lifting the whole engine. Unless you are an experienced mechanic, you should not attempt this.

If you instead decide to replace them all by jacking up the car and going one at a time, you are multiplying the likelihood that something will go wrong.

You may want to replace all at once because when one breaks it causes stress on the others, thus increasing the likelihood that they will get damaged as well. Further, it is easier and cheaper to purchase all the engine mounts at the same time.

Replacing Engine Mounts as They Break

If you catch the damage early, it may make more sense to replace the engine mounts as they break. This is because it is much more likely for certain mounts to break before others.

Not all Engine mounts are subject to the same stress. For example, the torque from accelerating the engine stresses one mount more than others, and you will turn in one direction more frequently producing more g-force on a particular mount.

Replacing one Engine mount in your Honda Accord is easier than replacing them all at once, usually. This can be done using car jacks and some basic tools but depending on the damage this can become extremely difficult.

Finally, if you go the route of replacing one at a time, you must become more vigilant regarding the remaining mounts. Consider that they are the same age as the one that needed replacing, and they were under more stress before the damaged one was replaced.

How Much Does It Cost to Replace the Engine Mounts in My Honda Accord?

The cost of replacing the engine mounts in your Honda Accord will depend on your location, how many you are replacing, and whether you choose to hire a mechanic or do it yourself.

If you decide that you are a competent enough mechanic to replace the engine mounts in your Honda Accord in your own garage, the cost to replace the mounts will depend on the cost of tools and parts.

Assuming you have the tools, you need, if you are only buying one mount, you may pay less than $10 depending on which mount, and which year Accord you are driving.

Note that if you are getting genuine Honda parts you could alternatively pay well over $100 for an engine mount, depending on the mount you need.

If, on the other hand, you decide to purchase all the engine mounts at the same time, it will most likely cost you somewhere in the range of $70 an $120. Even if you decide to only replace each mount as needed, you may save if you purchase them all at once anyway.

You will eventually need to replace them all anyway.

If you decide to hire a mechanic to replace the engine mounts in your Honda Accord, beside the cost of parts as listed above, you will also need to pay for the cost of labor. The cost of labor will depend on your location, but on average is around $90.

Assuming no other damage, you can expect this job to take around 3 hours, or $270 in labor. Considering the cost of parts and labor, a reasonable price to pay to have the engine mounts replaced in your Honda Accord is $370.