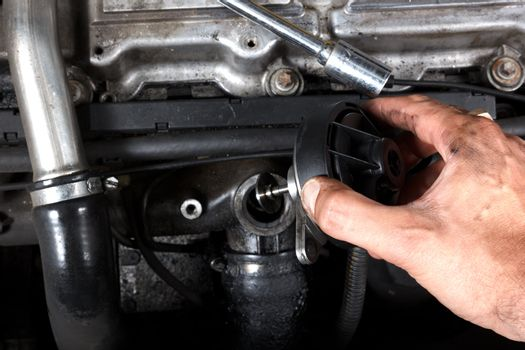 The EGR valve is responsible for recirculating the emissions of the engine so that they are returned to the combustion chamber rather than being released into the exhaust and exiting the vehicle via the tailpipe. If there is a malfunction with the EGR valve, there is a possibility that there will be a rise in emissions as well as a drop in fuel economy. So, how much does the EGR valve replacement cost?

In general, it will cost you about $300 to replace an EGR valve, The cost may differ based on the year, model, or make of your vehicle as well as the kind of system that your vehicle has. Typically, the average cost of replacement is $25o. However, the labor costs may be around $60 to $80 per hour, and the cost of components will be somewhere in the range of $190 to $270.

These price estimates do not, of course, take into account the additional expenditures that will be incurred in the form of fees and taxes. In this article, we will discuss the EGR valve replacement cost in detail:

The servicing should also involve testing the EGR transducer, checking the vacuum hoses leading to the valve, erasing any error messages, removing carbon deposits from the EGR pintle, as well as re-testing the valve to make sure it is working properly after the replacement. The following table includes estimates for the cost to get your EGR valve replaced:

When it comes to replacing an EGR valve in your car, the make and model of your car are often the two most important factors that determine the EGR valve cost. A solenoid, a valve, as well as a pressure mechanism, are all components of the valve itself, which makes it an intricate element. Simply purchasing the component might be a prohibitively costly endeavor. On the other hand, the overall cost of your replacement will be determined by the following factors.

Brand of the Part

When compared with purchasing an aftermarket component, the price of an OEM EGR valve will always be higher. Here, you should be prepared to pay anything from $65 for OEM valves made by manufacturers like Ford to upwards of $500 for OEM valves made by brands like Mercedes or Jeep. Because of this substantial variation in the price range, it is quite vital to know the brand and model of your car.

On the other hand, you nearly always have the option of searching for aftermarket components to bring that cost down. For instance, if you purchase a component that is made-to-fit, it means that it has been designed to fit into your specific car or a variety of automobiles that have comparable requirements. In most cases, the price of these is anywhere from one-third to one-half less than that of an OEM item. You also have the option of purchasing universal components; however, you must proceed with extreme care in this regard because various automobiles make use of distinct gasket fits and pin connection systems.

The Kind of Component

There are primarily two types of EGR valves, which are vacuum-operated & electronically controlled. The majority of modern cars are operated electronically these days. However, if you have a car that is around 15 years old or older, it is most probable to have a vacuum-operated valve rather than a pressure-operated valve. These are not only easier but also quite a little less expensive.

Modern components include a solenoid that is controlled by a computer and an electrical connection that might have anywhere from two to six pins. These may cost more than $150 in certain cases. In addition, the price of your release valve will go up if it is attached directly to the intake manifold instead of going via an intermediary.

In most cases, the EGR valve that is located on a gasoline line that leads to the intake will be constructed out of both plastic and metal. These are more affordable and may occasionally be purchased for less than $50, particularly if purchased used. You’ll require composite metal with exceptional heat resistance if your valve is located close to the intake manifold. That will be more expensive than a plastic valve that is lighter.

Vacuum lines, fuel lines, electric lines, and the intake are some of the things that EGR valves link to. Every one of these components stands a chance of being worn out over time.

You should also make sure that you change the gaskets that are located surrounding the valve. Although most valves already have these gaskets installed, it is important to double-check, particularly if you are purchasing a used valve. All of these things might add to the price of the components as well as the price of the labor.

The exhaust gas recirculation valve may be found on the side of the engine in certain diesel vehicles. Nevertheless, it ought to be accessible to a fair amount of people.

As a result of this, you should generally anticipate spending around an hour’s worth of money on labor to replace the valve. In other instances, the task may even be completed in a shorter amount of time.

If your EGR valve malfunctions, the symptoms you experience will be determined by whether or not it is jammed open, closed, or just not functioning properly. However, the most prevalent signs will be a rough idle, a decrease in fuel efficiency, as well as the smell of gas or gasoline.

Whenever the “Check Engine” light illuminates the dashboard of your vehicle, it is the system in your automobile alerting you to the fact that there is a fault with a certain component or system in your vehicle. A faulty EGR valve is one of the possible causes. In most cases, the computer in the car will be able to detect the location of the EGR valve or the circuit it is connected to. The Check Engine light will turn on if it detects a problem with any of these components, at which point the driver may either confirm the problem with a diagnostic scanner or take the vehicle to a technician to have it checked out.

#2 – Reduced Engine Power If there is an issue with the EGR valve, one of the first things you will notice is reduced engine performance. Your vehicle’s air and fuel ratio will be thrown off if its EGR valve is broken or even merely blocked, which will result in decreased performance. Because of this, the engine will have a variety of issues, including a decrease in acceleration, fuel economy, and power.

If you reside in a place that needs you to undergo emissions testing every couple of years, you could find out that you have a faulty EGR valve if you end up failing this test. The state in which you live may also force you to obtain this testing. If you are unsuccessful, you should be aware of this possibility even if it is unlikely that you will be informed about it.

Because the engine will use more gasoline, the exhaust coming out of the tailpipe will include a greater quantity of hydrocarbons. This will heighten the smell of petrol to the point that it will be detectable to the passengers when they are inside the vehicle’s cabin.

The engine is Running Hot

If the EGR valve becomes stuck in the closed position, the intake manifold will not receive the appropriate quantity of air. This will result in the engine running hot, which may reduce its performance, lead to the engine stalling, and cause an increase in the amount of gasoline used. You could also see additional adverse effects, such as the engine overheating in some circumstances. Sadly, this symptom may also be the consequence of various faults, and because of this, you will require a diagnostic or an examination of the EGR valve to verify.

Rough idle is a term used to describe the situation in an automobile that occurs when the vehicle’s revolutions per minute (RPM) are inconsistent and/or fall below a predetermined limit. This is one of the most typical symptoms that might result from a faulty EGR valve.

When there is a problem with the EGR valves, the ultimate result is that they become stuck in the open position. When this happens, a state known as rough idle will develop as a result of the recirculation of the exhaust gasses; this will occur regardless of whether or not there are ideal circumstances.

There is a wide range of prices for the cost of replacing an EGR valve, from $200 to $400. The price of the components by themselves will be somewhere in the range of $140 and $360. The cost of labor by itself will range from $60 to $80, based on the hourly rate that the mechanic charges. The best part is that even while replacing an EGR valve is not the cheapest thing to do, particularly on certain cars, the replacement procedure shouldn’t take the technician any more than an hour to complete.